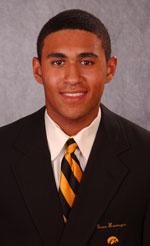 2005 – played in 23 games, starting 14… missed six weeks with a broken arm after getting hit by a pitch against Wichita State (Mar. 25)… Iowa’s primary centerfielder and leadoff hitter before breaking his arm… 5-for-7 in stolen base attempts… made two starts in Big Ten play.

College – Attended Central Arizona College for one season where he played LF and CF.

High School – Four-time all-Conference selection… played in all-State All-Star game as a senior… played on the Colorado Rockies Scout team in 2001 and 2002.