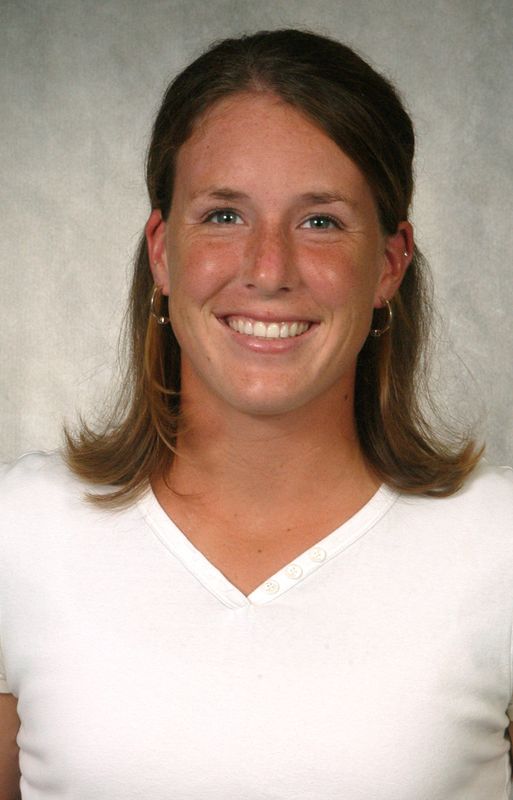 2005 as a Senior– Named first team all-regional…second team all-Big Ten selection…started 45 games, including 35 inside the circle…led the team with 1.21 ERA and 288 strikeouts…compiled a 29-9 record in 265.1 innings pitched…became Iowa’s all-time career strikeout leader with 94 strikeouts…led the Big Ten in saves and batters struck out looking…threw second career no-hitter and struck out a career-high 17 batters against Georgia Southern (March 4)…struck out 17 batters against Creighton in NCAA Tournament (May21)…threw a complete game shutout while striking out 12 and hit the game-winning home run vs. Penn State in the Big Ten Tournament…named to Big Ten All-Tournament Team…named Big Ten Pitched of the Week twice (March 8 and March 29).

2004 as a Junior– Named first team all-regional…second team all-Big Ten selection…started 31 games with a 22-14 record…shattered the single-season strikeout record she set last year against Wisconsin (May 2)…ended the season with 313 strikeouts…struck out double digits in 11 games, including a career-high 16 against Boston (March 4)…pitched three one-hitters…threw three-hit shutout and recorded 10 strikeouts against Maine at NCAA Regionals…11-3 record with a 0.87 ERA and 113 strikeouts in Big Ten play…Academic all-Big Ten selection.

2002 as a Freshman– Started 14 games in the circle for the Hawkeyes, earning a 10-5 record…led all Iowa pitchers with a 1.63 ERA and held hitters to a team-low .194 average…had a perfect 4.0 record in the Big Ten…took a perfect game into the seventh inning in her home debut, finishing with a one-hitter against Illinois State (March 27)…also went 2-for-3 and hit her first career home run against Illinois State.