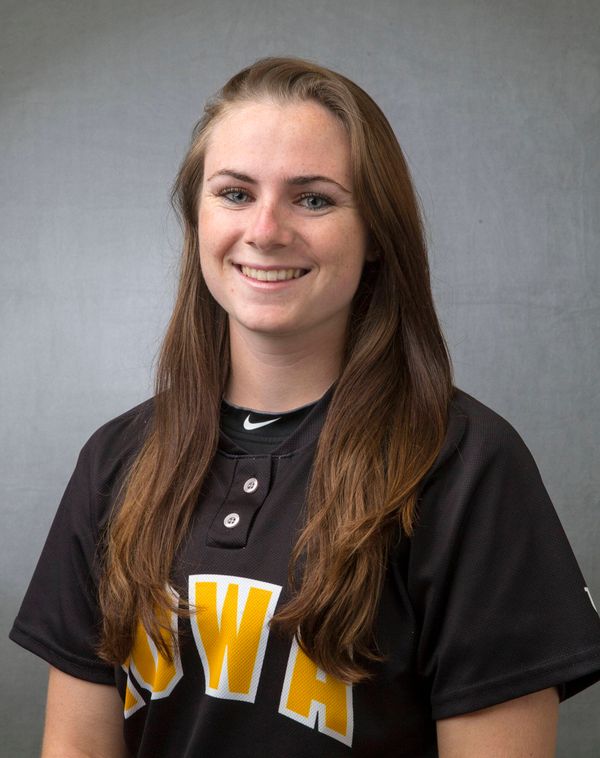 Hawk Items… Played and started every game of her collegiate career at shortstop (213-of-213)… broke or tied five school records and finished in the top 10 in 12 statistical categories… hit .442 in her senior campaign to break Iowa’s single-season batting record for the second time in her career (.437 in 2013)… batted .410 in her career, besting the program’s 18-year-old record of .409 set by Lea Twigg in 1997… registered 63 career doubles to break Kari Knopf’s 18-year-old career doubles record of 52 set in 1997… recorded 20 doubles in 2015 to tie Iowa’s single season school record set by Liz Dennis in 2002… went 3-for-4 at the plate with three doubles in her final game to tie the program record for doubles in a single game (Alicia Gerlach vs. Michigan in 1999, Christy Herbert vs. Purdue in 1997)… four-time NFCA All-Midwest Region selection and first team All-Big Ten pick… named to the conference’s All-Big Ten Defensive Team in 2014 and 2015… named to the Top 50 Watch List for USA Softball Player of the Year in 2014… invited to the USA Softball Women’s National Team Selection Camp in 2014 — one of 32 athletes and one of six sophomores… ended her career at Iowa second all-time in RBIs (153), tied for second in triples (13), fourth in home runs (27), fifth in runs scored (130), tied for fifth in hits (253), tied for eighth in home runs in a single season (9), and tied for 10th in hits in a single season (76)… four-time Big Ten weekly award winner (Player of the Week twice, Freshman of the Week twice).

2015 as a Senior… First Team All-Big Ten honoree… named to the conference’s All-Defensive team… First Team All-Midwest Region selection… recorded at least one hit in 49-of-59 games this season… plated a run in Iowa’s 4-3 loss to Hofstra… drove in a run in Iowa’s 4-3 loss to No. 6 Louisiana-Lafayette… plated three runs in Iowa’s 12-4 win over Northern Iowa… scored two runs in Iowa’s 10-2 victory over LIU Brooklyn… went 2-for-3 with a double and an RBI in Iowa’s 3-2 win over No. 17 UCF… recorded a double and scored two runs in Iowa’s 2-0 victory over Florida A&M… recorded her 19th career home run in Iowa’s 12-11 victory over Cal State Fullerton… led the team in batting average (.533), slugging percentage (.867), and ob-base percentage (.563) in five games at the Judi Garman Classic… raised her batting average from .371 to .424 in Iowa’s seven-game road swing with 13 hits, including two 3-for-4 performances at Oklahoma State and Tulsa in the final two contests… went 1-for-2 with an RBI, two runs scored and two walks against Maryland on March 20… was a perfect 2-for-2 at the plate with two RBIs, two runs scored and a walk against Maryland on March 21… went 2-for-3 with a double and a walk against Nebraska on March 25… hit 1-for-2 with a double and a walk in game two of the Michigan series… helped Iowa to a win over Michigan in game three of the series, going 2-for-2 at the plate with two runs scored and two walks… stole a base, scored a run, walked, recorded an RBI and went 3-for-4 at the plate against Western Illinois on April 2… registered eight hits in 12 at bats, including two triples and two home runs in a three-game series against Illinois (April 3-5)… went 2-for-3 with a triple, 2 RBIs, and a walk in Iowa’s 15-7 run-rule win over Illinois on April 3… plated three runs against Illinois on April 4… scored a career high three runs against Illinois on April 5… hit a home run and a triple against Illinois on April 5… was a perfect 3-for-3 at the plate with a double, walk and 2 RBIs at Wisconsin on April 10… delivered the game-winning home run in Iowa’s 10-inning victory over Wisconsin on April 12… recorded her eighth multiple hit game of the season with three singles, an RBI, and a run scored against Iowa State on April 15… registered the game-winning, two-run home run against Purdue on April 17… was 1-for-2 with a walk in the first game of a doubleheader against Purdue on April 18… registered her 16th multiple hit game of the year with a 2-for-3 effort at the plate with two doubles… registered her ninth home run of the season against Missouri on April 22… recorded her 59th career double against Minnesota on April 25… went 1-for-1 with a single and a sacrifice bunt against Minnesota on April 26… recorded her 60th career double against Northwestern on May 3… went 2-for-4 with a triple and a single and scored a run against Rutgers in the opening round of the Big Ten Tournament on May 7… the triple was the 13th of her career and 3rd of the season… hit a single and scored a run in Iowa’s Big Ten Tournament quarterfinal win over No. 12 Minnesota on May 8… broke or tied four school records in her final game in a Hawkeye uniform… went 3-for-4 at the plate against Nebraska in the Big Ten Tournament semifinal game with three doubles and two runs scored to tie Iowa’s school record for doubles in a game and match Iowa’s single season doubles record with 20…. her 3-for-4 performance raised her season average to .442 to break her own single season batting average record of .437 set in 2013… Raised he career average to .410 to break Iowa’s 18-year-old career batting average record of .409… hit .545 in three games at the Big Ten Tournament with 6 hits in 11 at bats including 3 doubles and a triple… registered a 1.000 slugging percentage and a .545 on base percentage throughout the Big Ten Tournament… letterwinner.

2014 as a Junior… NFCA Second Team All-Midwest Region selection… First Team All-Big Ten and All-Defensive Team pick… named to the Top 50 Watch List for USA Softball Player of the Year… eighth player all-time to receive First Team All-Big Ten recognition three times… played and started every game of the season at shortstop (47-of-47)… led Iowa in batting average (.361), slugging percentage (.602), on-base percentage (.452), walks (21), hits (48), doubles (11) and RBIs (25)… in Big Ten, Blank ended the season eighth in fielding double plays (11), ninth in triples (3), 12th in slugging percentage (.602) and on-base percentage (.452)… compiled the longest hitting streak (9) and reached base streak (14)… ended the season with a seven-game reached base streak… had a team-most 13 multiple-hit games (nine two-hit contests and four three-hit games) and six multiple RBI games (one 4-RBI games, three 3-RBI games and two 2-RBI games)… hit a pair of home runs in the sixth inning against UNI on April 30 to match her career-high… matched her career-high with two doubles against Ohio State on May 4… drove in a season-high four runs and went 2-for-3 with a triple at Illinois on March 22… knocked in three runs against Wisconsin on March 29, Northwestern on April 5 and UNI on April 30… was perfect at the plate twice; at Iowa State (1-for-1 with a home run and two walks) and against Ohio State (3-for-3 with two doubles and a walk)… stole a career-high two bases at Wisconsin on March 30… ends her junior season ranked second in career batting average (.398), sixth in career doubles (43), eighth in career home runs (18), ninth in career RBI (113) and 10th in career triples (10)… letterwinner.

2013 as a Sophomore… NFCA First Team All-Midwest region selection… First Team All-Big Ten selection… named a third team All-American and first team all-conference honoree by College Sports Madness… hit .437, setting Iowa’s single season batting average record — 10th highest average in Big Ten history… started all 54 games at shortstop and in the three-spot in the lineup… hit .420 with 10 home runs and 29 RBIs in 23 games against teams selected for the NCAA Tournament, registering a .500 on-base percentage and an .826 slugging percentage… ranked 18th nationally in batting average (.437), 19th in RBIs per game (1.09), and 35th in slugging percentage (.766)… averaged .72 runs per game, 1.28 hits per game and .21 home runs per game… third in the Big Ten and 19th nationally in RBIs (59 total, 1.09 per game) — figure is second most in a season in program history… led Iowa with 11 home runs (total ranks third at Iowa in a single season)… reached base in 39 of the last 40 games, including 22-of-23 league games… hit safely in all but eight games… posted 19 multi-hit games and 19 multiple-RBI contests (11 2-RBI games, four 3-RBI games, three 4-RBI games, one 5-RBI game)… named Big Ten Player of the Week twice… named Big Ten Player of the Week on April 15, after reaching base in all 14 plate appearances while leading the Hawkeyes to a series victory at Northwestern — finished a perfect 4-for-4 when Northwestern chose to pitch to her, compiling a solo home run, a triple, two singles, three runs and three RBIs… she garnered eight walks and two hit-by-pitches… added a stolen base to go along with a 2.250 slugging percentage… named Big Ten Player of the Week on March 4 after hitting .429 in her home state, leading Iowa to wins against No. 15 Stanford (7-6), No. 24 Oregon State (9-3), Cal State Fullerton (7-0) and CSU Bakersfield (5-3), March 1-2 — recorded at least one RBI in every game, recording eight in all, and scored five runs… finished 6-for-8 (.750) in series at No. 9 Michigan (Apr. 20-Apr. 21), with two home runs, two doubles, four RBIs, 14 total bases, three runs and three walks… notched first multi-home run game at No. 9 Michigan (Apr. 21), equaling a career-high four hits (4-for-4) and notching four RBIs… in series opening 12-7 win on April 12 at Northwestern, tied a personal and school record with four walks… named to the 2013 Lovelace Invitational All-Tournament Team, leading Iowa to the team title… a unanimous selection, hit .400 with two runs scored, six hits, three RBIs, one home run, and a walk… tallied the game-winning long ball in Iowa’s victory against Oklahoma State on Feb. 15… named a Primetime Performer by CollegeSoftball360 for her performance in Iowa’s opening weekend tournament — the Hilton Houston Plaza Classic… posted a career-best five RBIs in win against No. 11 Louisiana-Lafayette (Feb. 9)… finished third in league assists (145)… finished second in the Big Ten with a .437 batting average, third in RBIs (59), slugging percentage (.766) and on-base percentage (.552), fourth with 15 doubles, sixth with 121 total bases, seventh with 35 walks and ninth with 11 home runs… letterwinner.

High School… Second team National Fastpitch Coaches Association (NFCA) all-region selection… four-time all-CIF pick, including first team honors as a sophomore, junior and senior… named league MVP as a freshman and junior… team MVP as a senior… three-time team co-captain… batted above .500 in every prep season (.578 as a freshman, .517 as a sophomore, .578 as a junior and .545 as a senior)… played for the ASA-affiliated 18Gold Strike Force and the 16U Victory USA teams that compete in the ASA Gold National tournaments… Strike Force placed ninth at nationals in 2011.

Personal… Born July 7, 1993… daughter of James and Marcia Blank… has one older brother, JD… father, James, was born and raised in Iowa City, while her mother, grandfathers, great grandfather, and some aunts and uncles are UI alums… sport management major with minors in psychology and sports studies.