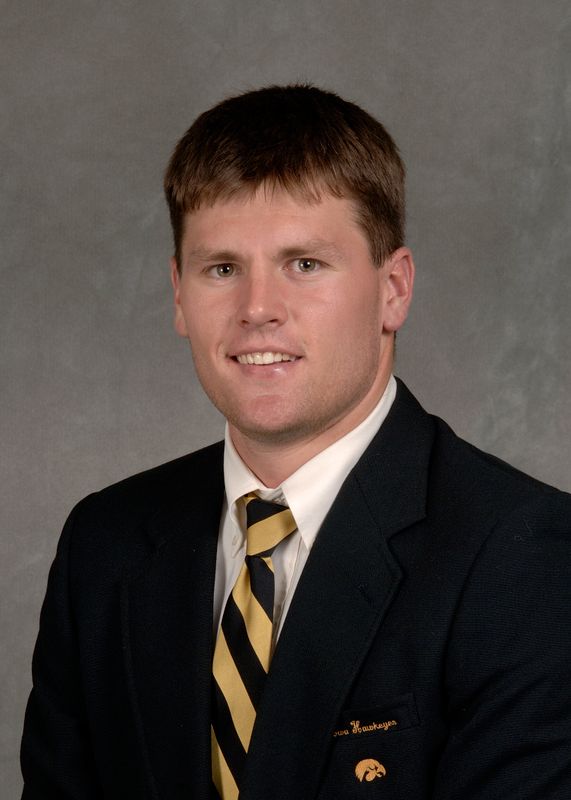 Hawk Item — Played summer ball in the Northwoods League for the Mankato Moondogs.

2008 — Appeared in 47 games with 43 starts… hit .342 on the year, which was the fourth-highest average on the team… recorded two four-RBI games… went 8-for-16 in series at Indiana (Apr. 11-13)… finished with a .314 average in the conference with a .500 slugging percentage… was named the MVP of the Music City Classic All-Tournament Team (Mar. 3)… named Big Ten Player of the Week (Mar. 4)… tied for fourth on the team in hits with 54… recorded 14 multi-hit games… had three multi-RBI games…was the third-highest on the team in walks (19) … tied for second on the team in home runs (4)… his longest hitting streak on the year was 10 games… played either first base or DH… was one of only five Hawkeyes to hit more than one triple, with two on the year… turned 15 double plays… tied for the most at bats in a single-game with seven against Minnesota (May 4)… recorded the most walks in a single-game with three against Ohio State (May 16)… hit .360 with runners in scoring position with 24 RBI.

2006 – Saw action in 32 games, starting 27… one of three Hawkeyes to pitch and play the field… started 11 games at first base, 12 at designated hitter, four at third base and two at pitcher… also made four relief appearances on the mound… went 3-of-4 with a double and an RBI in his first-career game (vs. Austin Peay State, Feb. 24)… went 3-for-4 with four RBIs against IPFW (Mar. 26)… went 6-of-11 with five runs scored in three games against Penn State (Apr. 7-8)… pitched in relief during Iowa’s exhibition against the AAA Iowa Cubs and struck out former major leaguer Michael Restovich… had four multi-hit games.

High School – Iowa Class 2A Player of the Year and Pitcher of the Year as a senior… three-time first team all-conference, all-district and all-state selection… two-time member of the all-state Super Team… holds 15 career records and 13 single-season records at Wilton High School… led Wilton High School to three conference titles and the 2005 state championship as a senior… posted a career record of 39-3 with 417 strikeouts… hit over .500 final three years of prep ball… smacked 44 home runs, knocked in 209 RBIs and stole 47 bases… two-time all-state selection in basketball, all-district nominee in football and a two-time all-conference player in golf.