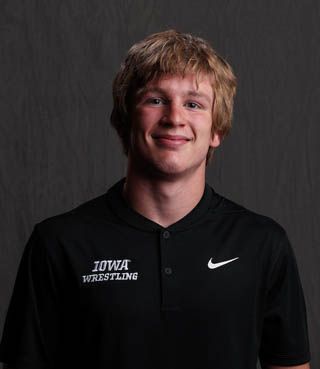 High School
• Placed at state all four years, finishing as 106 pound runner-up as freshman and 132 as senior… was fifth at 113 pounds as a sophomore and 132 pounds as a junior
• Third four-time place winner in Mason City history, joining Cullan Schriever and Tim Krieger
• Mason City High School Athlete of the Year as a senior… Globe Gazette Star Class Male Athlete of the Year as a senior
• Three-time team Most Valuable Wrestler
• Went 116-23 during his high school career… was 15-4 as a freshman, 38-9 as a sophomore, 29-6 as a junior and 34-4 as a senior
• Conference champion at 132 pounds as a junior… was runner-up at 113 as a sophomore and 132 as a junior… placed third at 106 as a freshman
• Went 5-2 at Fargo during senior season
• Academic all-state and all-conference all four years… nominated to the Mason City Academic Hall of Fame
• National Honor Society
• High school coaches were Dusty Rhodes, Andy Thompson, Jake Phillips and Justin Faught

Personal
• Born Aug. 19, 2003, in Mason City, Iowa
• Son of Dusty and Molly Rhodes
• Has a younger brother, Hale
• Father wrestled at Northern Iowa and Wartburg… was a Division III National Champion at Wartburg
• Majoring in biology