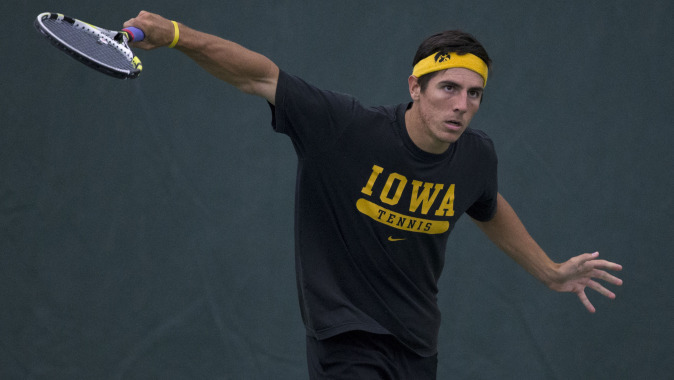 After a historic Big Ten doubles performance for Iowa on Friday, kicking things of in the Round of 64 singles main draw was Patrick. The junior faced a test against Vasilis Stavropolous of Nebraska and got off to a winning start by taking the match in straight sets (6-1, 6-2). Patrick followed that up with a win over Michigan State’s Brett Forman (6-2, 2-6, 6-4).

“We had a very successful day as a team. Dominic played well in both of his matches, winning a tight three set contest over a very good player from Michigan State who beat him earlier in the season,” said interim head coach Ross Wilson.

Patrick’s doubles teammate, Hagan, was also in action. The senior, seeded tenth in the tournament, received a bye in the Round of 64 before facing Lamar Remy of Wisconsin in the Round of 32. Hagan was able to stay on the winning track edging out Remy in straight sets (6-1, 6-3).

Silverstein was able to keep the winning trend going for the Hawkeyes, seeded 11th in the draw he received a bye first round before taking a match against Michigan State’s Michael Dube (6-1, 2-6, 6-2) in the Round of 32. Also notching a win was 12th-seeded Theodorou. The freshman received a bye before defeating Doug Zade of Michigan State in the Round of 32 (6-3, 6-4).

“Josh was able to pull out a tough three set match. We can see his game really starting to come around, he is improving. We have a lot of good opportunities coming up on Sunday and we are all looking forward to the competition,” added Wilson.