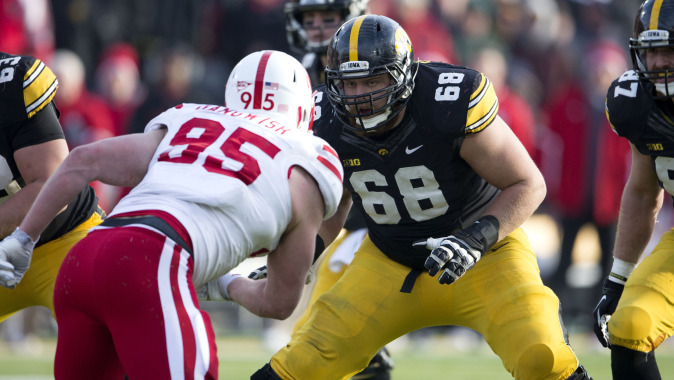 Four team captains for the 2014 season were announced, with that group including Scherff and senior running back Mark Weisman on offense and Trinca-Pasat and senior linebacker Quinton Alston on defense. The four seniors served as game captains in all 12 games this season.

Scherff, a Denison, Iowa, native, started all 12 games at left tackle and has started all 25 games over the past two seasons. He was also named the Rimington-Pace Offensive Lineman of the Year in the Big Ten and earned first team All-Big Ten honors for the second straight season. Scherff is one-of-three finalists for the Outland Trophy.

Trinca-Pasat, a Chicago native, has started all 37 games over the last three seasons. He also shared the Players Choice Award with Weisman. The Players Choice Award is voted on by all team members and is based on consistent effort, preparation, and attention to detail, sacrifice and readiness. Trinca-Pasat has collected 65 tackles, including 11.5 tackles for loss and 6.5 sacks.

Along with being named a permanent captain, Weisman was recognized with the Forest Evashevski Scholastic Achievement Award and the Brett Greenwood Award. The Evashevski Award is presented to a senior student-athlete who has the highest scholastic record. The Greenwood Award is presented to a walk-on student-athlete who embodies the values and behaviors of former Hawkeye walk-on Brett Greenwood, a defensive back from Bettendorf, Iowa, who completed his playing career in 2010.

Established in 2011, the Greenwood Award also honors former Hawkeyes who fits the description, one year at a time, for each season Kirk Ferentz has coached the Hawkeyes. Tight end Dallas Clark and center Bruce Nelson, who each earned All-America honors in Iowa’s 2002 championship season, were recognized.

Weisman, a native of Buffalo Grove, Illinois, recently was named a second team Academic All-American and is a candidate to earn Academic All-Big Ten honors for the third straight year. Weisman has led Iowa’s rushing attack for three straight seasons. He has over 2,500 career rushing yards and ranks third in career rushing touchdowns (30). Weisman is one-of-three finalists for the Burlsworth Award, an award for the top former walk-on in the nation.

Two Hawkeyes earned the Next Man In Award, including senior center Tommy Gaul (Des Moines, Iowa), on offense and senior end Mike Hardy (Appleton, Wisconsin) on defense. Gaul joined the Hawkeye program as a walk-on and started the final six games of the season at center. Hardy played in all 12 games, recording 17 total tackles and three tackles for loss while playing both end positions.

Rudock, a native of Westin, Florida, has thrown for over 2,404 yards, with 16 touchdowns and just five interceptions. He ranks among Iowa’s top 10 quarterbacks in career yardage (4,787) and passing touchdowns (34). Davis, a Detroit native, has 34 tackles, including nine tackles for loss. Lowdermilk leads the team in tackles (95) and interceptions (three).

Junior kicker Marshall Koehn (Solon, Iowa) and junior linebacker Travis Perry (Urbandale, Iowa), were recognized with the Reggie Roby Special Teams Award. Koehn was recognized as the specialist, while Perry was recognized for his overall contributions. Koehn led the Big Ten in touchback percentage (66.7%), made 12-of-16 field goals and all 34 of his PAT attempts to rank second on the team with 70 points. Perry has been a contributor on special teams throughout his career. He has recorded 19 tackles in nine games, missing the final three games due to injury.

The Player Appreciation Award was presented to Marilyn and Dale Howard of Iowa Falls. Dale and Marilyn are longtime UI contributors and the Dale and Marilyn Family Pavilion in Carver-Hawkeye Arena is named in their honor. In addition to their generous support of the Iowa Football Legacy Campaign and Carver-Hawkeye Arena Enhancement Campaign, the Howard’s have provided courtesy cars for UI athletic staff members through the Dale Howard dealership in Iowa Falls.

The Bump Elliott Appreciation Award went to Mike Hanrahan, who serves a leadership role for Hy-Vee Food Stores in their food service provided for the Hawkeye football program. “Win on the Road” recognition went to Frank Sloan of Hawkeye Wood Shavings.

The Distinguished Service Award was presented to Ron Stewart of Des Moines. Stewart has provided security for the Iowa football program and is serving his last year in that role in 2014.