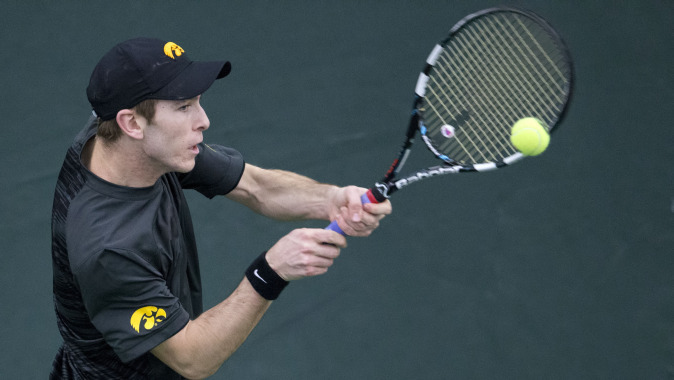 Provo, Utah— The University of Iowa men’s tennis team, registered a 4-3 triumph over BYU Saturday afternoon at the BYU Indoor Tennis Courts. The win is the third straight for the Hawkeyes and improves their record to 5-1.

“A great win for our team today. We knew BYU would be a tough team to beat on the road and we were going to have to bring everything we had to the battle. Jake Jacoby came up clutch and we will enjoy this win as we get ready for Utah on Monday,” said UI head coach Ross Wilson.

Iowa’s 57th-ranked doubles duo consisting of Matt Hagan and Dominic Patrick squared off with BYU’s No.1 team Sullivan/Goryachkov in a bid to earn their fifth straight win of the spring campaign. However, it was Sullivan/Goryachkov that took the victory, handing Hagan/Patrick their first loss (6-3). The Hawkeyes’ No. 2 freshman pair Lefteris Theodorou and Stieg Martens dropped their match against Pfister/Carrazedo at the No. 2 spot (6-3). Tied at 5-5, Jacoby and Josh Silverstein’s match versus Sargeant/Ball was abandoned due to BYU already capturing the doubles point.

In singles, Silverstein tallied the Hawkeyes’ first victory, defeating David Ball in straight sets (6-2, 6-4). Theodorou stepped in for Hagan at the No.1 position and delivered, registering a win over BYU’s No. 1 Francis Sargeant in an exciting three-set match (6-3, 5-7, 6-3). Patrick kept things rolling for the visitors at the No.2 position with another exciting three set, come-from-behind win defeating Shane Monroe (2-6, 6-4, 6-4). The win extended the junior’s winning streak to five, he is now 5-0 thus far in the spring session.

At the No. 6 position, Juan Canales tallied a win over Nils Hallestrand, setting up a winner-take-all match between Jacoby and Jacob Sullivan. The freshman dropped the first set (6-7) before coming back in the second, winning (7-6). At one set apiece it came down to the tiebreaker and Jacoby prevailed taking the third set (6-4), clinching the match for the Hawkeyes.

“We competed our tails off. We had everything against us and we fought back after losing the doubles point to take the victory. The freshman stepped up, which is what we have been waiting for this year. This win will be a huge momentum swing as we continue the season,” said Patrick.

Iowa has a quick turn-around before a trip to Salt Lake City, Utah, to compete against the Utah Utes on Monday at the Eccles Tennis Center.