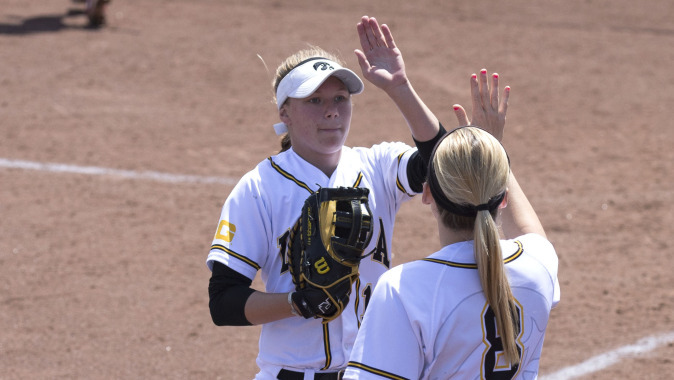 After a scoreless inning of play, junior Erin Erickson put the Hawkeyes on the board with one swing of the bat in the top of the second. Her first homerun of the season and the fifth of her career went over the wall in center.

Missouri State responded with two runs in the bottom half of the inning. With two runners on base after a single and a fielder’s choice, Bear leadoff hitter Ali Trickey came through with a clutch single through the right side to score the pair and give her team a 2-1 advantage.

The Bears extended their lead to 3-1 in the bottom of the third. Back-to-back singles and a sacrifice bunt put two in scoring position with one away. Hawkeye freshman third baseman Sarah Kurtz knocked down a hard-hit grounder, getting the out at first, but the Bears pushed a run across on the play before redshirt sophomore Shayla Starkenburg could close the frame with a strikeout.

Sophomore Kaitlyn Mullarkey cut the deficit to one run, 3-2, with a home run to keep center field to lead off the fourth for the Hawkeyes. It is her first long ball of the season and the third of the year for Iowa.

From there, it was all Missouri State. The Bears added two runs in the fifth and a run in the sixth, and held the Iowa bats to two hits in the remainder of the contest to record the 6-2 final win.

Erickson — who posted a .308 batting average and a .615 slugging percentage on the weekend with a double, home run, and two RBIs — was named to the Ragin’ Cajun Invitational All-Tournament team following the contest.

“She prepares well for games and is able to play a few different spots on the field for us,” fifth-year head coach Marla Looper said. “She has her mind right for success when she steps on the field. Kudos to her, but I know she’s not that excited about it because the team outcome wasn’t what we want it to be.

“The girls know it’s about the team and not them individually. They each want to do their job for the team.”

Starkenburg (2-6) was tagged with the loss in the circle. She threw 4.1 innings, allowing three earned runs and seven hits. Junior Jillian Navarrete (1.0) and freshman Ashley Yoways (0.2) split the final two innings in the circle.

The Hawkeyes resume play at the UCF Doubletree/Radisson Invitational on Feb. 27-28 in Orlando, Florida. Iowa will play LIU Brooklyn, UCF, Princeton and Florida A&M in the two-day tournament.