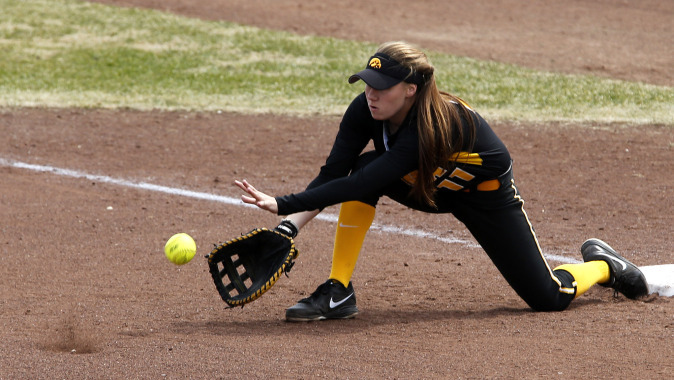 PLAY BALL
The University of Iowa softball team (3-10) travels to Orlando, Florida, for the UCF Doubletree/Radisson Invitational this weekend. Iowa will play a doubleheader against LIU Brooklyn (1-13) and No. 17 UCF on Friday, a twinbill against Princeton (1-4) and Florida A&M (0-5) on Saturday, and conclude the weekend with a contest against an opponent yet to be determined on Sunday.

MULLARKEY, ERICKSON PROVIDE OFFENSE
Junior Erin Erickson and sophomore Kaitlyn Mullarkey recorded solo homeruns against Missouri State on Feb. 22. Erickson sent her first homerun of the season and fifth of her career over the center field wall. Mullarkey’s blast was the second of her career and first of the season.

ERICKSON NAMED TO ALL-TOURNAMENT TEAM
Junior Erin Erickson was named to the Ragin’ Cajun Invitational All-Tournament team following the five-game invite Feb. 20-22. Erickson posted a .308 batting average and a .615 slugging percentage on the weekend with a double, home run, and two RBIs.

MULLARKEY SHINES AT RAGIN’ CAJUN INVITE
Kaitlyn Mullarkey hit her way into the starting lineup at the Ragin’ Cajun Invitational on Feb. 20-22. The sophomore recorded pinch-hit single against Hofstra on Feb. 21 before being entered into the starting line-up at first base against Missouri State on Feb. 21. Mullarkey led the Hawkeyes with a .500 batting average and a 1.167 slugging percentage in the three-day tournament. She hit her first home run of the season and second of her career against Missouri State on Feb. 22.

GYERMAN LEADING THE WAY
Sammi Gyerman leads the team in hits (12) through the first 13 games of the 2015 season. The redshirt sophomore has 12 hits in 39 at bats this season. She owns a .308 clip, has a .386 on-base percentage, and is slugging .359. She has reached base successfully in 10-straight games.

WOOD HEATS UP
Freshman Allie Wood went 3-for-5 in a doubleheader against Hofstra and No. 6 Louisiana-Lafayette on Feb. 20. Wood recorded her first career extra-base hit and a game-high 2 RBIs against Hofstra.

DOUBLE PLAYS
Iowa ranks second in the Big Ten in fielding double plays. The Hawkeyes have turned eight double plays on the season, including two against No. 6 Louisiana-Lafayette on Feb. 20.

DOUBLE TROUBLE
The Hawkeyes rank eighth in the Big Ten in doubles. Iowa has recorded 16 doubles on the season. Junior Whitney Repole leads the team with three, while redshirt sophomore Sammi Gyerman, senior Megan Blank and freshman Cheyenne Pratt each have two.

SCOUTING LIU BROOKLYN
LIU Brooklyn is 1-13 on the season. The Blackbirds lost to Big Ten foe Penn State 9-1 on Feb. 7 at the FAU Kick-Off Classic in Boca Raton, Florida, and dropped a pair of games to Purdue (7-6; 12-0) on Feb. 13-14 at the Florida International Invitational in Miami, Florida. Iowa holds a 5-2 advantage in the series.

SCOUTING #17 UCF
UCF holds a 12-1 record this season and is currently ranked No. 17 in the USA Today/NFCA Division I Top-25 Poll. The Knights travel to Gainesville, Florida, on Wednesday to face No. 1 Florida. The all-time series between the Hawkeyes and Knights is tied at one game apiece.

SCOUTING PRINCETON
Princeton owns a 1-4 record on the season. The Tigers finished 17-26 overall and 9-11 in the Ivy League a season ago. Saturday marks the first meeting between the Hawkeyes and the Tigers.

SCOUTING FLORIDA A&M
Florida A&M is 0-5 on the season. The Rattlers finished 25-29 overall and 9-6 in the Mid-Eastern Athletic Conference in 2014. Iowa holds a 3-0 advantage in the all-time series.

YOWAYS IN A NEW ROLE
Freshman Ashley Yoways was recruited as an infielder, but she is now finding success in the circle for the Hawkeyes. Yoways notched her first career win against Northern Iowa on Feb. 6. She has started three games for the Hawkeyes this season.

URTZ GOES YARD
Freshman Sarah Kurtz sent a two-run homerun over the center field fence in the Hawkeyes’ 6-0 victory over Green Bay on Feb. 8. The long ball was the first of Kurtz’s career and the first for the Hawkeyes this season.

IN THE RANKINGS – B1G
Three Big Ten teams appeared the USA Today/NFCA Division I Top-25 Poll released Feb. 17. No. 3 Michigan and No. 13 Minnesota are ranked within the top 25, while Nebraska is receiving votes.