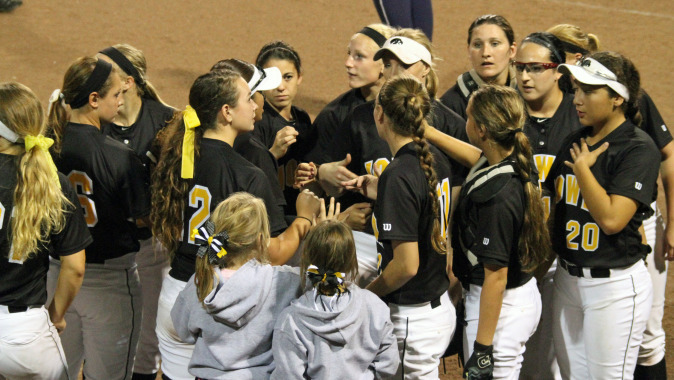 IOWA CITY, Iowa — The University of Iowa softball team’s charter bus picked up the Hawkeyes at the Orlando International Airport an 1 1/2 hours before first pitch of its first game on Friday at the UCF Doubletree/Radisson Invitational. Inclement weather forced travel issues, but Iowa overcame adversity and lack of sleep to achieve success on the field.

The Hawkeyes got off the bus, went through an abbreviated warmup, and put together a dominant performance against LIU Brooklyn. The bats exploded in the team’s 10-2 run-rule victory, compiling 10 hits in five innings of action. The win ended an eight-game losing streak.

Every player in the hitting lineup reached base and eight recorded hits. Freshman Ashley Yoways earned the complete game win in the circle and the defense did not commit an error.

The Hawkeyes continued to perform in the nightcap, securing its most notable victory of the season, downing No. 17 Central Florida, 3-2. It is Iowa’s first victory over a ranked opponent this season and the first since sweeping No. 13 Missouri in doubleheader last season.

Senior Megan Blank went 2-for-3 to lead the team, while junior Erin Erickson plated the go-ahead run in the top of the sixth with a perfectly executed squeeze bunt. Redshirt sophomore Shayla Starkenburg earned the win in the circle, allowing one earned run on six hits and striking out three.

“After the adversity we faced getting here for our games on Friday, the girls did a great job coming out and being ready to play,” said UI head coach Marla Looper. “They did a nice job adjusting and attacking throughout the day.

“The team that showed up Friday was fun to watch. They were firing on all cylinders.”

The Hawkeyes finished the weekend with a 3-1 record, falling to Princeton, 10-2, in five innings on Saturday and adding a win over Florida A&M, 2-0, Sunday.

Even though the team had success, the Hawkeyes know there are still things to work on to continue on an upward trajectory moving forward.

“Our team did a good job adjusting this weekend, especially coming off of the last two weekends,” Starkenburg said. “But we still have a lot to work on.”

“Getting the two wins on Friday was a good motivation for us,” Erickson said. “There are still a lot of things we can get better at, but I think our extra work this week pushed us through Friday even though we had travel issues and were running on little sleep.

“We proved what we’re capable of, but we have to be sure of our abilities moving forward. We have the ability to surprise a lot of people. Once we become more consistent, we’ll be able to make a name for ourselves.”