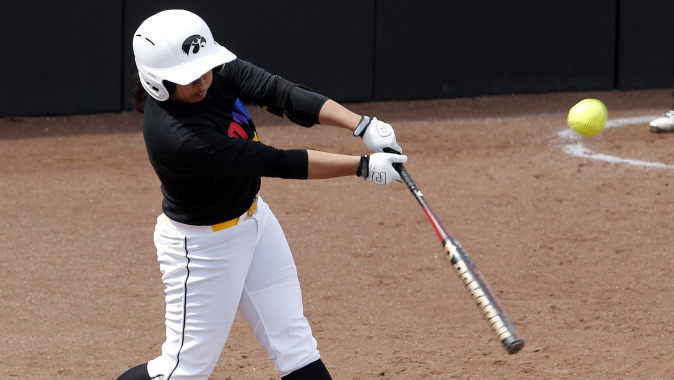 FULLERTON, Calif. — The University of Iowa softball team fell to San Diego State, 7-2, Saturday afternoon in Judi Garman Classic action. The Hawkeyes drop to 6-14 on the season, while the Aztecs improve to 13-8.

The Hawkeyes jumped ahead early with a run in the top of the first inning. Redshirt sophomore Sammi Gyerman reached on a fielder’s choice and senior Megan Blank moved her to third on a single to center. Sophomore Alyssa Navarro capitalized on the RBI situation with a single to right to give the Hawkeyes an early 1-0 lead.

Iowa plated another run in the top of the sixth. Gyerman and Blank sent back-to-back doubles into center field, narrowing the Aztec lead to 6-2.

The Aztecs got one back in the bottom of the sixth. The San Diego State lead-off batter reached on a double to center, moved to third on a passed ball and scored on an RBI single to give the Aztecs a 7-2 lead.

Six Hawkeyes recorded hits in the contest. Blank led the way on a 2-for-3 effort with a single, double and an RBI.

Redshirt sophomore Shayla Starkenburg (4-8) took the loss in the circle. She struck out two and did not allow a walk in six innings.