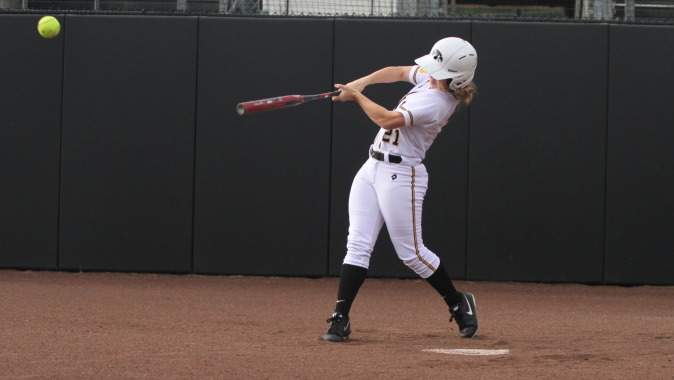 FULLERTON, Calif. — The University of Iowa softball team registered 19 hits en route to a, 12-11, victory over Cal State Fullerton on Saturday evening in Judi Garman Classic action. The Hawkeyes improve to 7-14 on the season, while the Titans fall to 14-11.

“All year long they have talked about wanting to be gritty and they showed that tonight,” said head coach Marla Looper. “They felt confident facing the pitchers they were facing, and because of that we knew even though we spotted them some runs we could come back from that.”

The Hawkeyes showed resiliency in a game that featured three lead changes. Seven Hawkeyes recorded multiple-hit games. Iowa’s 19 hits are the most by a Hawkeye team since Feb. 18, 2011 (29 vs. Iowa State).

The Titans reached the scoreboard first, plating four runs in the bottom of the second on three hits and an error.

The Hawkeyes got two back in the top of the third. Sophomore Claire Fritsch led off the inning with an infield single before redshirt sophomore Sammi Gyerman found grass in left for a single. Senior Megan Blank capitalized on the RBI chance with an infield single to second. With teammates on the corners, junior Erin Erickson executed a squeeze bunt to plate the second run of the inning.

Cal State Fullerton added to their lead in the bottom of the third. The Titans plated a run on a single and a hit by pitch to extend their lead to 5-2.

The Hawkeyes took their first lead of the game on a six-run rally in the top of the fourth. Freshman Allie Wood led it off with an infield single, and junior Holly Hoffman followed with a walk. With two outs freshman Cheyenne Pratt delivered an RBI single to left. Gyerman stepped up to the plate with runners on second and third and delivered a three-run blast to center field – the first homerun of her career. Blank followed suit when she sent the 19th homerun of her career over the right field fence. Erickson continued the rally, drawing a two-out walk before sophomore Alyssa Navarro sent an RBI double to center to give the Hawkeyes an 8-5 lead.

“Honestly, my weekend wasn’t as hot as I would have liked, but Coach Adam [Arbour] always tells us to leave it behind,” said Gyerman. “My teammates were on, and all I was thinking about was driving them in. I just saw the ball really well and drove it.”

The Titans evened the score in the bottom of the fourth inning. Cal State Fullerton caused the Hawkeyes to go to the bullpen, and added three runs on three hits and an error.

Iowa pulled ahead for the second time in the top of the fifth inning. Sophomore Kaitlyn Mullarkey reached on a fielder’s choice before Pratt and Fritsch hit back-to-back singles. Mullarkey slide into home and caused the Fullerton catcher to bobble the ball, giving the Hawkeyes a 9-8 lead.

The Titans scored two more runs in the bottom of the fifth inning to regain the lead, before the Hawkeyes pulled ahead for good in the top of the sixth. Wood and Hoffman hit back-to-back doubles to plate the first run of the inning. Fritsch extended the rally with her fourth hit of the game on an RBI single to center.

Gyerman extended the Iowa lead in the top of the seventh. The San Pedro, California native sent her second home run of the game over the left field wall to give Iowa a 12-10 lead.

“Sammi did a great job at the plate tonight,” said Looper. “She’s at the top of the lineup for a reason. She had ice in her veins, and she was seeing the ball really well tonight.”

The Titans added their final run in the bottom of the seventh, but redshirt sophomore Shayla Starkenburg and the Iowa defense held on to win the seesaw battle.

Starkenburg (5-8) was credited with the victory. The Ankeny, Iowa native pitched four innings in relief. She allowed three earned runs on five hits and struck out four. Ashley Yoways started the game for the Hawkeyes. The freshman allowed six earned runs on eight hits in three innings.

“I think Shayla did a phenomenal job in relief, especially with their big hitter [Missy] Taukeiaho,” said Looper. “She is a beast, and the last thing we wanted to do was give her another shot off the fence. Shayla went right at her and shut her down.”

Iowa returns to action Sunday against No. 2 Oregon. First pitch is set for 11 a.m. (CT).

“Fullerton is a quality ball club,” said Looper. “We gave the crowd a good ball game, and I want to carry that over into tomorrow.”