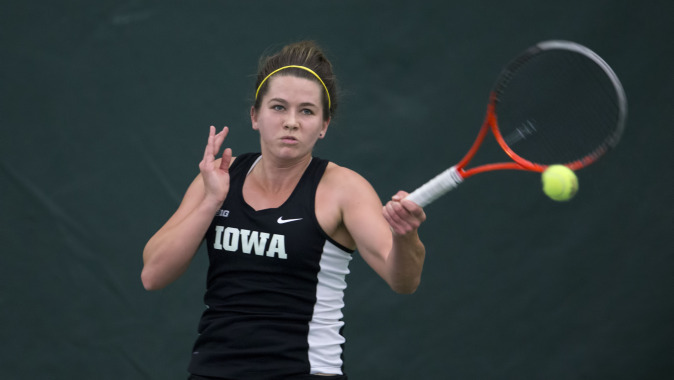 LAS VEGAS, Nevada — The University of Iowa women’s tennis team recovered from its loss against No. 13 Michigan on Friday by handing UNLV their eighth home loss of the season. The Hawkeyes improve to 6-6 overall after their 4-1 victory over the Rebels.

“The team compete very well today,” said UI head coach Katie Dougherty. “UNLV is a talented team and a tough place to play. I’m proud of how we bounced back after Michigan and had good practices on the road and executed well today.”

The Rebel’s Anett Ferenczi-Bakon and Mercedes Lopez Valez led Anastasia Reimchen and Shelby Talcott, 5-4 at the No. 1 doubles position when the match was abandoned.

The Hawkeyes continued strong into singles play as seniors Talcott, Zordani, and Ellen Silver recorded victories at the No. 1, No. 5, and No. 6 positions, respectively.

“Now our focus shifts to Indiana and playing another tough Big Ten team on Sunday,” Dougherty noted of Iowa’s next contest.

The Hawkeyes return to action on Sunday, March 22 as they host Big Ten foe, No. 52 Indiana. Competition will begin at 10:30 a.m. (CT) at the Hawkeye Tennis and Recreation Complex.