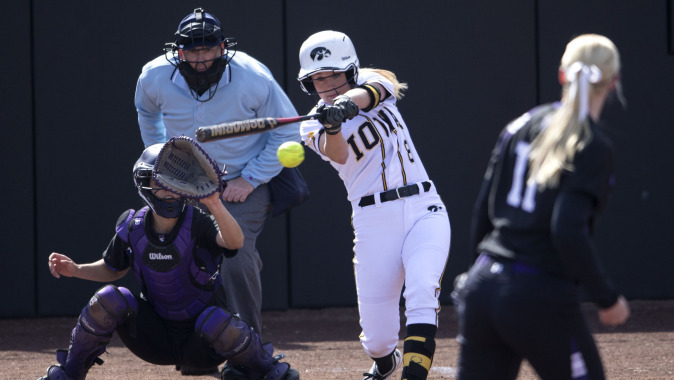 STILLWATER, Okla. — The University of Iowa softball team fell to Oklahoma State, 6-5, on Tuesday afternoon. The Iowa offense collected 10 hits but left seven runners on base in the contest. The Hawkeyes fall to 8-20 on the season with the loss, while the Cowgirls improve to 13-13.

The Iowa bats came to life in the top of the fourth. Redshirt sophomore Sammi Gyerman led off the inning with a walk. Senior Megan Blank trailed with a single to right before sophomore Alyssa Navarro sent an RBI double to left center to put the Hawkeyes on the board. Freshman Sarah Kurtz kept the rally alive with an RBI single to right, and junior Whitney Repole sent a double to the wall in right center to give Iowa a 4-3 lead. Two passed balls by the Cowgirl catcher allowed Repole to score and gave Iowa a two-run lead (5-3).

“We got the bats rolling in the fourth inning and made some solid contact throughout,” said head coach Marla Looper. “Unfortunately, we just didn’t get the big hit later when we had runners on base. We had a lot of mistakes defensively that we had to come back from. It was nice to see us come back from a deficit, but we have to play solid defensively to hold on to that lead.”

Oklahoma State tied the game on one swing in the bottom of the fifth. Cowgirl shortstop Gessenia DeLaCruz sent a two-run blast over the left field wall to tie the game at 5.

The Hawkeyes had a scoring chance in the top of the seventh. Freshman Cheyenne Pratt led off the inning with an infield single, and Gyerman followed with a walk. Redshirt junior Holly Hoffman loaded the bases with a single to center, but the Cowgirls turned a 3-2-3 double play to end the Iowa scoring chance.

Oklahoma State scored the winning run in the bottom of the seventh. The Cowgirls used two singles and a squeeze bunt to earn the walk-off victory.

Repole and Blank recorded six of Iowa’s 10 hits. Repole went 3-for-3 with two singles, a double and two RBIs. Blank was 3-for-4 on the day with two singles and a double.

Shayla Starkenburg (6-12) was credited with the loss. The redshirt sophomore allowed three earned runs on eight hits and walked three. The Hawkeyes committed five errors in the field.

“We have to clean it up and attack the ball,” said Looper. “The infield surface we faced today is similar to what we have at home. It’s hard, and it’s different than fields we have been on this season. We have to attack defensively and we didn’t do a very good job of that today.”

Iowa travels to Tulsa, Oklahoma, tomorrow for a contest against the Golden Hurricanes. First pitch is set for 4 p.m. (CT). ?