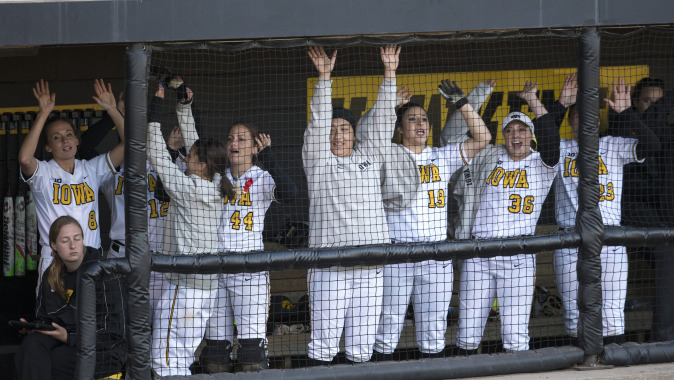 PLAY BALL
The University of Iowa softball team continues its home stand with a doubleheader on Wednesday against Big Ten foe Nebraska. Game one will begin at 3 p.m. (CT). Both contests will be streamed on Hawkeye All-Access available at hawkeyesports.com.

FOLLOW ALONG
Audio will be available for both games of the doubleheader on Hawkeye All-Access online at hawkeyesports.com. Jon Swisher will call the action. Gametracker is also available for all games at Pearl Field. Links can be accessed on the softball schedule page at hawkeyesports.com. To receive more frequent game updates, follow @IowaSoftball on Twitter and “like” our official page on Facebook, facebook.com/iowahawkeyessoftball.

PROMOTIONS
Wednesday is Facebook/Twitter appreciation day. A coupon for free admission can be found on the Iowa softball’s official Twitter and Facebook pages. The first 100 fans at game one will receive free Iowa softball traveling pillows. Fans can also register to win a $50 iTunes gift card.

1 AWAY FOR BLANK
Senior Megan Blank is one double away from sole possession of the Iowa Softball career doubles record. Blank currently shares the record (52) with Kari Knopf. The current record has been held since 1997.

RBIs ON THE RISE
Four Hawkeyes — Whitney Repole (10), Holly Hoffman (9), Alyssa Navarro (8) and Sammi Gyerman (18) — have either met or exceeded their RBI totals from a season ago. The Hawkeyes have plated 106 runs through 32 games this season — just 16 shy of last season’s total (47 games).

REPOLE FINDS SUCCESS
Junior Whitney Repole posted a .750 batting average in three games against Maryland on March 20-22. Repole registered three hits in four at bats, including a double and an RBI. The San Antonio, Texas, native has a .271 clip in 48 at bats this season.

HAWKEYES NOTCH 1ST CONFERENCE WIN
The Hawkeyes recorded their first conference victory on Saturday, March 21. Iowa scored eight runs on 12 hits to notch the 8-4 victory over Maryland. Redshirt sophomore Shayla Starkenburg got the complete-game win in the circle for the Hawkeyes. She allowed three earned runs on five hits. She walked seven and struck out three.

GYERMAN STAYS HOT
Sammi Gyerman registered a .500 clip in three games against Maryland this weekend. The redshirt sophomore recorded five hits in 10 at bats, including two doubles. Gyerman is hitting .320 on the season with a .515 slugging percentage and a .400 on-base percentage.

BLANK IN THE B1G
Megan Blank is currently ranked among the top ten in the conference in three different categories. Blank is tied for third in the Big Ten in doubles (9) and hits (39). Blank also ranks sixth in batting average (.424).

DOUBLE PLAYS
Iowa leads the Big Ten in fielding double plays. The Hawkeyes have turned 15 double plays on the season. They have recorded two double plays in a game three times: No. 6 Louisiana-Lafayette (Feb. 20), No. 6 Oklahoma (March 15) and Tulsa (March 18).

DOUBLE TROUBLE
The Hawkeyes rank second in the Big Ten in doubles. Iowa has recorded 47 doubles on the season. Senior Megan Blank leads the team with nine, while redshirt sophomore Sammi Gyerman has seven.

B1G HITS
Iowa is ranked seventh in the Big Ten in hits. Iowa has accumulated 209 hits in 32 contests this season. Senior Megan Blank leads the team with 39 hits, while redshirt sophomore Sammi Gyerman has 31.

STARKENBURG STRIKEOUTS
Redshirt sophomore Shayla Starkenburg is tied for third in the Big Ten in batters struck out (110) and ranks third in batters struck out looking (30). Starkenburg has fanned a career high nine batters twice this season (Florida A&M on March 1; East Carolina on March 14. She recorded her first career no-hitter against Southern Utah on Feb. 7. The Ankeny, Iowa, native has 110 strikeouts in 128.0 innings this season.

SCOUTING NEBRASKA
Nebraska is 15-12 overall in 2015 and 3-0 in conference play. The Huskers swept Michigan State in a three-game series March 20-22, scoring at least seven runs in each contest. The all-time series is currently tied at 12, with Nebraska winning the last five contests. The Nebraska coaching staff has Iowa ties. Their Director of Softball operations, Katie Brown, played at Iowa from 2007-10.

ON DECK
Iowa continues Big Ten Conference action with a three-game series on the road against No. 4-ranked Michigan. The Hawkeyes and Wolverines begin their series with a 3 p.m. (CT) game Friday, continue with a 1 p.m. game Saturday, and conclude the weekend with a 2 p.m. contest on Sunday. The Big Ten Network will air a live broadcast of Sunday’s game.