Why Success at Carver Will Continue 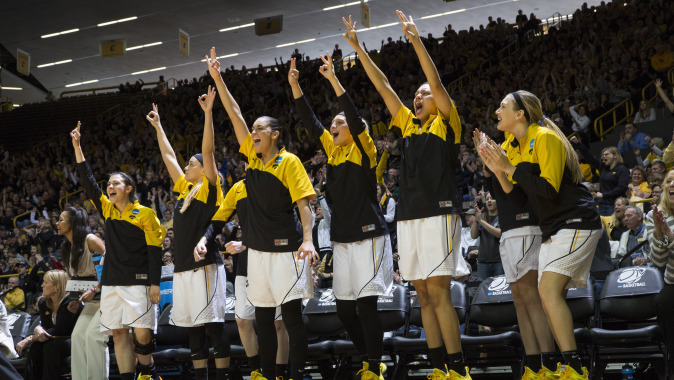 It was emotional for the standard reason, serving as a salute to the senior class of Melissa Dixon, Bethany Doolittle, Samantha Logic, and Kathryn Reynolds. It was awkward because the nearly 10,000 fans in attendance March 1 didn’t know with certainty if Carver-Hawkeye Arena would serve as one of 16 first and second-round sites for the upcoming NCAA Tournament.

So there were no bold MacArthur-esque “I shall return” speeches that day because there was still a Big Ten Tournament to play and a final decision on location was in the hands of the NCAA.

But the Hawkeyes did return to Carver-Hawkeye Arena for their eighth consecutive trip to the NCAA Tournament. They eliminated American, 75-67, on March 20 and then Miami (Florida), 88-70, on March 22. One of the many achievements of the 2014-15 team and its senior class is a spotless, school-record 18-0 record at home.

Iowa meets Baylor on Friday in a Sweet 16 matchup in Chesapeake Energy Arena in Oklahoma City. The Hawkeyes have the possibility of playing four more games this season, but they won’t compete on Mediacom Court again until November.

So what will Hawkeye fans see next season inside Carver-Hawkeye Arena? Here are sample highlights from Iowa’s 18-point win against Miami:

With the game tied at 15 midway through the first half, UI sophomore Alexa Kastanek swipes the ball from Miami’s Jassany Williams. UI freshman Whitney Jennings goes the length of the court, makes a layup, and the Hawkeyes lead, 17-15.

With 4:36 left in the first half and the Hawkeyes behind, 27-23, UI junior Kali Peschel grabs an offensive rebound and scores on a put-back. A possession later, Iowa tied the game and never trailed again.

On two possessions early in the second half, UI freshman Chase Coley converts layups that extend Hawkeye leads to seven and six points.

In the second-round victory, the Hawkeye bench of Coley, Kastanek, and Peschel went 7-of-9 from the field (Peschel was 2-of-2 from 3-point), with 10 rebounds, three assists, and a steal. And only one turnover.

“We have confidence in them every time they are on the floor,” Logic said. “They come in and work their butts off in practice every day, and not just those three. The other six that didn’t get in, they come in and work so hard making us better. It’s nice to see them reap the benefits of that because they deserve it.”

As for other returning underclassmen, sophomore Ally Disterhoft has started 33 games, averaging a team-high 15.2 points per game with 5.9 rebounds and 36.4-percent accuracy from distance. Jennings has started 30 games (and played in all 33), averaging 9.1 points and 2.8 assists per game.

Peschel averages 16.2 minutes in 33 games (with three starts). She shoots 80 percent from the line and 41.2 percent from 3-point range.

“People don’t realize she is the second-best 3-point and free throw shooter on our team,” UI head coach Lisa Bluder said. “She’s coming in and doing great things. I think she’s playing the best basketball of her career right now.”

“She’s automatic,” Bluder said. “She has the best left hand I’ve ever seen. We need to get her a little stronger over the summer, but we will.”

“Lex came in and did some great things for us defensively and took care of the ball,” Bluder said. “And then the other six players that didn’t get into the game today that work so hard every day and don’t get the glory. To me, they are the heroes.”

Something else will return next season to Carver-Hawkeye Arena: a large and vocal crowd. The Hawkeyes averaged 5,301 fans for 18 home dates, including 9,726 against Minnesota and 7,220 against Miami. If you don’t think that’s an advantage, ask Hurricanes’ head coach Katie Meier.

“I would like to invite the entire Iowa fan base to come to a home game at Miami,” Meier said. “I would love to have them cheer for us because it’s a huge factor and it has an amazing impact on the game.”

For the Hawkeye women’s basketball program, that all adds up to a pretty good return.