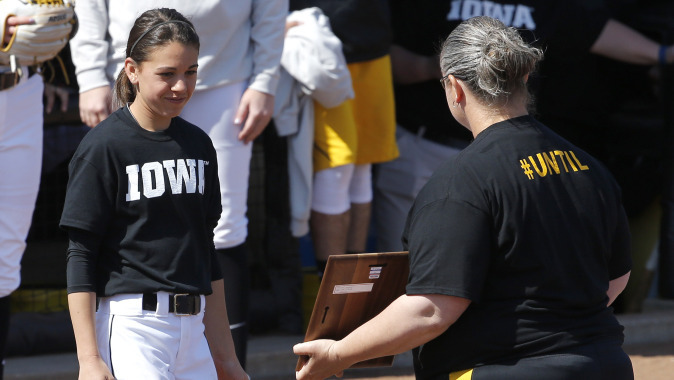 IOWA CITY, Iowa — University of Iowa junior Haley Hansel is a Big Ten student-athlete, but that’s not her only big role.

Each year the University of Iowa softball team challenges its student-athletes to find an organization in the Iowa City community they are passionate about. Hansel found that in Johnson County’s Big Brothers Big Sisters program, and she has been an active member for the organization as a big sister for the last two years.

“Right now I’m working with my Little,” said Hansel, a native of Overland Park, Kansas. “I go and visit her once a week at school over her lunch and recess period. I’m there to hang out and be an extra support system for her.”

Hansel first heard about Big Brothers Big Sisters from a senior teammate during her freshman season. She always enjoyed working with kids, and the organization gave her an opportunity to make a positive impact with children in the Iowa City area.

Two years later, she has quickly become a reliable volunteer in Johnson County’s program. Amanda Remington, the mentoring coordinator and supervisor of Big Brothers Big Sisters in Johnson County, is grateful for her service.

“She has been fantastic,” said Remington. “She’s always dependable, and she is a great asset to our program. She always goes above and beyond.”

Her willingness to go the extra mile is something her fifth-year head softball coach Marla Looper is proud of.

“Haley exemplifies a lot of what we want in our student-athletes,” said Looper. “When we put them on this task of finding something they have a passion for, she took it as an opportunity. She has taken advantage of the platform she has as a student-athlete at the University of Iowa.”

On Saturday, April 4, Hansel’s Little threw out the first pitch at the team’s third-annual Awareness Game, an experience her Little won’t soon forget.

“She thought it was the coolest thing ever to throw out the first pitch,” said Remington. “Haley is definitely a great role model for our kids.”

Throughout her three years as a student-athlete, Hansel has collected a total of 116 hours of community service. This doesn’t include her recent winter break trip to Ecuador where she helped bring support and awareness to indigenous tribes through an organization called The Pachamama Alliance.

On Saturday, Hansel’s coaches and teammates surprised her with the Inaugural Hawkeye Service Award, an honor given to the softball player with the most volunteer hours and consistent presence within the Iowa City community.

“She’s always busy doing something,” said Looper. “She’s one of our most studious athletes, works hard on the field, and is definitely that all-around student-athlete that you love. She really believes in that extracurricular piece of volunteer work and helping others that are a little less fortunate than her.”

For Hansel, however, it’s not about the recognition or awards.

“I love it,” Hansel said. “It’s an opportunity to make the City of Iowa City seem smaller. It’s nice to have connections within the community and know people outside of softball and outside of school. It makes me feel like I have more of an impact.”