Badgers Walk Off Against Iowa 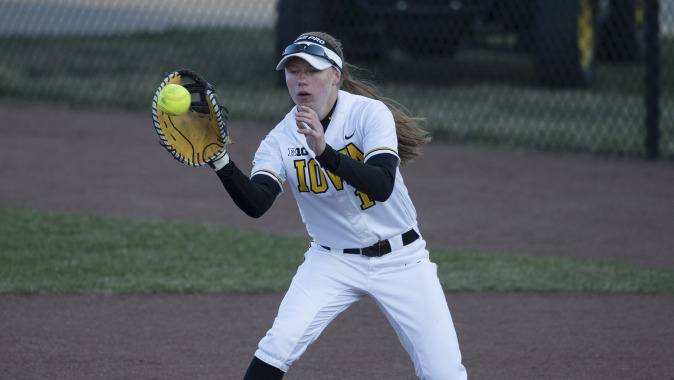 MADISON, Wis. — Wisconsin spoiled a University of Iowa softball victory and evened the Big Ten Conference series with a walk-off fielder’s choice in the bottom of the seventh inning to earn the 5-4 decision on Saturday afternoon.

After falling behind Wisconsin 1-0 in the first and a scoreless second, the Hawkeyes rallied for four runs to jump ahead in the top of the third inning. Sophomore Claire Fritsch and redshirt sophomore Sammi Gyerman drew consecutive walks to set the table for junior Holly Hoffman who used a bases clearing double to left to put Iowa ahead.

Sophomore Kaitlyn Mullarkey kept the drive alive with a two-out, two-run home run to left center field. It marked the third long ball of her sophomore season, and the fourth of her Hawkeye career.

Hawkeye starter Ashley Yoways and the defense held the Badgers scoreless in the second, third, fourth, and fifth, coming up with big plays. Wisconsin stranded seven runners in the stretch.

The Badgers started a comeback in the bottom of the sixth, scoring two runs on four hits. Yoways was able to halt the run, handling a grounder in the circle for the final out to keep Iowa ahead, 4-3.

One swing of the bat in the bottom of the seventh knotted the score, as Wisconsin pitcher Taylor-Paige Stewart led it off with a solo home run. After a single, the Hawkeyes brought redshirt sophomore Shayla Starkenburg in to pitch.

An error and hit by pitch followed to load the bases for Maria Van Abel who delivered the walk-off fielder’s choice to trigger the 5-4 win.

Yoways (2-13) took the loss in the circle. She allowed 10 hits and four earned runs in her six innings pitched. Starkenburg threw to the final three batters of the contest.

“We gave them that run in the first inning, and then Yoways settled down, threw really nicely, and held them at bay as we went along,” head coach Marla Looper said. “Unfortunately, in the later innings she started to elevate the ball a little bit, and they were able to get some solid hits.”

Hoffman (2-for-4) recorded the lone multiple hit performance for Iowa with two RBIs and a run scored. Also driving in a pair of runs was Mullarkey.

Game three of the series is set for 3 p.m. (CT) on Sunday. The contest will be shown live on the Big Ten Network.

“Our challenge now is to come away winning the series,” Looper said. “We came into the weekend saying that this was an important series for us to take advantage of. We didn’t do our job to take it today, so tomorrow is our opportunity. We will be out here and ready to attack the game.”