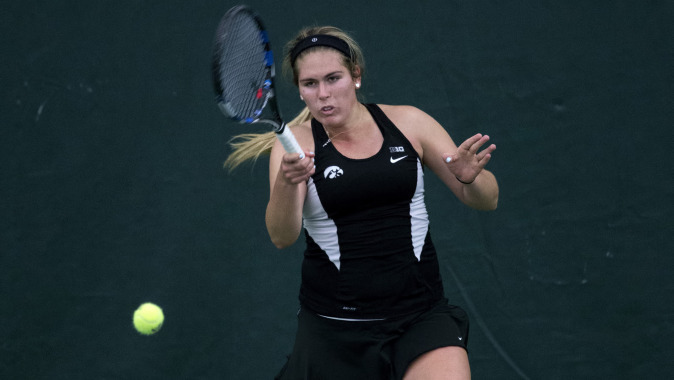 CHAMPAIGN, Ill. — The University of Iowa women’s tennis team fell to No. 51 Illinois, 6-1, in the final conference match of the season on Sunday. The Hawkeyes close out their regular season with a 2-9 B1G record and finish 8-13 overall.

“It’s tough to end the season with a loss, but the team played hard and battled,” UI head coach Katie Dougherty said. “Illinois is hit right now and playing with a lot of confidence. It’s been disappointing, but there’s a lot to take from this season, to build on and to learn from.”

Illinois gained an early lead by taking the doubles point with victories at the No. 1 and No. 3 positions. Senior Morven McCulloch and junior Annette Dohanics fell to Illinois’ Melissa Kopinski and Louise Kwong, 8-1 at the top of the lineup. Senior duo Shelby Talcott and Ellen Silver battled at the No. 3 slot, but couldn’t hold on and fell to Grace Tapak and Madie Baillon, 8-5.

Senior Katie Zordani and Zoe Douglas made efforts to keep the Hawkeyes in contention for the doubles point with an 8-5 victory over Jerricka Boone and Alexis Casati, but Illinois gained the advantage heading into singles play.

Zordani continued her success into singles play, collecting the only victory for Iowa at the No. 5 position. The senior beat out Illinois’ Madie Baillon in straight sets, 6-3, 6-4. The momentum was short lived, however, as the Fighting Illini clinched the victory with wins at the other five singles slots.

The top of the Hawkeye lineup struggled to find a rhythm as all three top players fell in straight sets. McCulloch couldn’t top Alexis Casati at the No. 1 singles slot, and fell, 6-2, 6-3. Freshman Anastasia Reimchen faced Illinois’ Melissa Kopinski, but couldn’t overcome her senior opponent, losing 6-2, 6-2. Dohanics battled with Louise Kwong at the No. 3 slot, but couldn’t capitalize and was topped, 6-2, 6-0.

“Losing our No. 1 player and a senior, and having to play the last half of the season without her was brutal and the team worked hard to compete and did everything they could,” coach Dougherty said of senior Shelby Talcott and the effort the Hawkeyes made to make up for her absence in the lineup. “I’m very proud of the effort and heart our team has showed.”