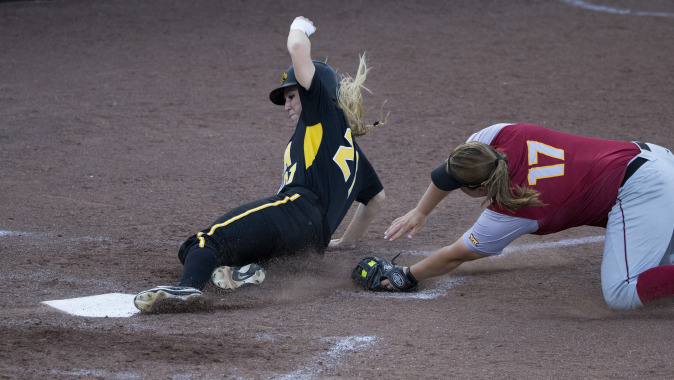 PLAY BALL
The University of Iowa softball team travels to Columbia, Missouri, for a Wednesday contest against the No. 15-ranked Tigers before traveling to Minneapolis for a three-game set at No. 12-ranked Minnesota. Wednesday’s contest is set for 5 p.m. (CT). The Hawkeyes and Gophers will open the series on Friday at 6 p.m., continue on Saturday at 1 p.m., and wrap up the series with a 12 p.m. contest on Sunday.

SERIES COVERAGE
Wednesday’s game will be shown live online on SEC Network + available at espn.go.com. Live audio on Hawkeye All-Access is available for all four games. Zach Mackey will have the call on Wednesday, while Austin Bramley will call the action in Minneapolis. Links to audio and Gametracker (live stats) are available on the softball schedule page at hawkeyesports.com.

ON TRACK
Hawkeye senior Megan Blank is on track to break Iowa’s single season batting average record for the second time in her career. She currently owns a batting average of .445, eight points ahead of the record she set in 2013 when she ended the season with a .437 clip. In her career, Blank boasts a .409 batting average which ties Lea Twigg, who played from 1996-97, for the career batting average school record. The Culver City, California, native has started all 203 games at shortstop since arriving at Iowa.

STRIKEOUTS X 3
Redshirt sophomore pitcher Shayla Starkenburg has more than tripled her strikeout total of 51 from a season ago, totaling 167 so far in 2015. She has also significantly raised her strikeouts per appearance average from 2.55 (51 strikeouts in 21 appearances) in 2014 to 4.18 (167 in 40 appearances) this year. Starkenburg currently leads the Big Ten in innings pitched (197.2), is second in appearances (40) and games started (30), third in looking strikeouts (52), and tied for fourth in strikeouts (167).

BIG TEN STAT RUNDOWN
? Senior Megan Blank is second in the Big Ten in hits (65) and batting average (.445), tied for second in doubles (15), ranks fifth in total bases (108), and is sixth in on-base percentage (.515) and slugging percentage (.740).
? Redshirt sophomore Sammi Gyerman is fourth in the conference in total plate appearances (180).
? Redshirt sophomore pitcher Shayla Starkenburg leads the Big Ten in innings pitched (197.2), is second in appearances (40) and games started (30), third in looking strikeouts (52), and tied for fourth in strikeouts (167). Starkenburg is also tied for eighth in games finished (10), tied for seventh in wins (14), and ranks 12th in opposing batting average (.273).
? Redshirt junior Holly Hoffman is tied for fourth in the Big Ten in runners caught stealing (11).

POWER SURGE
The Hawkeyes recorded a home run in all three games last weekend at Purdue. Senior Megan Blank hit the game-winning, two-run blast on April 17. Freshman Allie Wood recorded a solo shot in the first game of a doubleheader on April 18, while sophomore Kaitlyn Mullarkey registered a solo blast in game two. The Hawkeyes have already increased their home run total from last season with seven games remaining (23 in 2014; 29 in 2015). Senior Megan Blank currently leads the 2015 squad with eight home runs.

ON A ROLL
Senior Megan Blank is currently riding an 11-game hitting streak. The senior recorded a 12-game hitting streak earlier this season and has recorded at least one hit in 42-of-49 games in her senior season. Redshirt sophomore Sammi Gyerman has reached base successfully in a season-high 14-straight games.

CAREER DAY FOR STARKENBURG
Shayla Starkenburg threw a career-high 10 innings and fanned a career-high 11 batters in Iowa’s 10-inning win over the Badgers on April 12. The redshirt sophomore gave up three earned runs on 13 hits and two walks. The Ankeny, Iowa, native leads the Hawkeyes in wins (12), ERA (4.95), appearances (38), starts (28), complete games (22), shutouts (3), and strikeouts (155) this season.

CONFERENCE AVERAGE
Four Hawkeyes are hitting .300+ in conference play. Senior Megan Blank leads the team with a .460 clip, while freshman Angela Schmiederer (.400) joins her in the 400s. Redshirt sophomore Sammi Gyerman (.486), and redshirt junior Holly Hoffman have each recorded .300+ clips in 17 conference contests this season.

TOUGH OUT
Senior Megan Blank has just eight strikeouts in 146 at bats this season. Blank currently leads the team in batting average (.445), slugging percentage (.740), and on base percentage (.515).

DOUBLE TROUBLE
The Hawkeyes are fourth in the Big Ten in doubles. Iowa has recorded 70 doubles on the season. Senior Megan Blank, the career doubles school record holder (58), leads the team with 15, while redshirt sophomore Sammi Gyerman has 10.

TAKE 3
Iowa is currently tied for sixth in the Big Ten in triples. Iowa has registered seven triples on the season. Senior Megan Blank and redshirt sophomore Sammi Gyerman lead the team with two triple apiece.

STARKENBURG STRIKEOUTS
Redshirt sophomore Shayla Starkenburg is tied for fourth in the Big Ten in batters struck out (167) and third in batters struck out looking (52). Starkenburg fanned a career high 11 batters in Iowa’s 3-2 10-inning victory over Wisconsin on April 12. She has struck out nine batters twice this season (Florida A&M on March 1; East Carolina on March 14. Starkenburg recorded her first career no-hitter against Southern Utah on Feb. 7. The Ankeny, Iowa, native has 167 strikeouts in 197.2 innings pitched this season.

UP NEXT
Iowa returns to Pearl Field for its final three-game conference series against Northwestern on May 1-3.