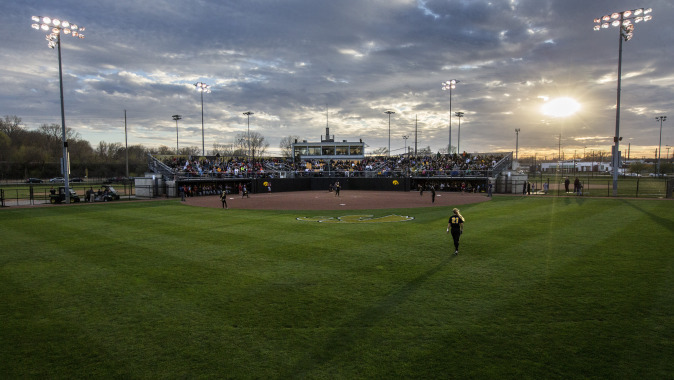 PLAY BALL
The University of Iowa softball team concludes the regular season when it hosts Northwestern for a three-game series this weekend. The series begins with a 6 p.m. (CT) contest on Friday (80’s Night), continues with a 2 p.m. (CT) game on Saturday (Alumni Day) and ends with a 1 p.m. (CT) game on Sunday (Senior Day).

SERIES COVERAGE
All three games will be shown live online on the Big Ten Digital Network. A live audio stream is also available. Play-by-play announcer Rob Brooks will call the action on Friday and Sunday, and Austin Bramely will call Saturday’s action. Links to both are available on the softball schedule page at hawkeyesports.com.

ON TRACK
Hawkeye senior Megan Blank is on track to break Iowa’s single season batting average record for the second time in her career. She currently owns a batting average of .448, 11 points ahead of the record she set in 2013 when she ended the season with a .437 clip. In her career, Blank boasts a .411 batting average, which currently stands as the school record with three regular season games left in the season. The Culver City, California, native has started all 207 games at shortstop since arriving at Iowa.

STRIKEOUTS X 3
Redshirt sophomore pitcher Shayla Starkenburg has more than tripled her strikeout total of 51 from a season ago, totaling 171 so far in 2015. She has also significantly raised her strikeouts per appearance average from 2.55 (51 strikeouts in 21 appearances) in 2014 to 3.98 (171 in 43 appearances) this year. Starkenburg currently leads the Big Ten in innings pitched (211.0), is second in games started (33), third in looking strikeouts (54), fourth in appearances (43), and tied for fifth in strikeouts (171).

BIG TEN STAT RUNDOWN
? Senior Megan Blank is tied for second in the Big Ten in hits (69) and batting average (.448), ranks third in doubles (16), fifth in total bases (116), and is sixth in on-base percentage (.515) and slugging percentage (.740) and on base percentage (.514).
? Redshirt junior Holly Hoffman ranks fourth in the Big Ten in runners caught stealing (12).
? Redshirt sophomore Sammi Gyerman is tied for ninth in the conference in total plate appearances (190).
? Redshirt sophomore pitcher Shayla Starkenburg leads the Big Ten in innings pitched (211.0), is second in games started (33), third in looking strikeouts (54), fourth in appearances (43), and tied for fifth in strikeouts (171).
? Sophomore Kaitlyn Mullarkey has been hit by a pitch 11 times this season, tying for the third most in the Big Ten conference.

ON A ROLL
Sammi Gyerman is currently riding an 18-game reached base streak. The redshirt sophomore has a .371 clip, a .909 slugging percentage, and a .557 on base percentage in conference action.

DOUBLE TROUBLE
The Hawkeyes are eighth in the Big Ten in doubles. Iowa has recorded 71 doubles on the season. Senior Megan Blank, the career doubles school record holder (59), leads the team with 16, while redshirt sophomore Sammi Gyerman has 10.

TAKE 3
Iowa is currently tied for seventh in the Big Ten in triples. Iowa has registered seven triples on the season. Senior Megan Blank and redshirt sophomore Sammi Gyerman lead the team with two triples apiece.

CONFERENCE AVERAGE
Three Hawkeyes are hitting .300+ in conference play. Senior Megan Blank leads the team with a .455 clip, while freshman Angela Schmiederer (.400) joins her in the 400s. Redshirt sophomore Sammi Gyerman has a .371 average through 20 conference contests this season.

TOUGH OUT
Senior Megan Blank has just 11 strikeouts in 154 at bats this season. Blank currently leads the team in batting average (.448), slugging percentage (.753), and on base percentage (.514).

STARKENBURG STRIKEOUTS
Redshirt sophomore Shayla Starkenburg ranks fifth in the Big Ten in batters struck out (171) and third in batters struck out looking (54). Starkenburg fanned a career high 11 batters in Iowa’s 3-2 10-inning victory over Wisconsin on April 12. She has struck out nine batters twice this season (Florida A&M on March 1; East Carolina on March 14. Starkenburg recorded her first career no-hitter against Southern Utah on Feb. 7. The Ankeny, Iowa, native has 171 strikeouts in 211.0 innings pitched this season.

CAREER DAY FOR STARKENBURG
Shayla Starkenburg threw a career-high 10 innings and fanned a career-high 11 batters in Iowa’s 10-inning win over the Badgers on April 12. The redshirt sophomore gave up three earned runs on 13 hits and two walks. The Ankeny, Iowa, native leads the Hawkeyes in wins (14), ERA (5.18), appearances (43), starts (33), complete games (26), shutouts (4), and strikeouts (171) this season.

GYERMAN MAKES HISTORY
Sammi Gyerman hit for the cycle to lead the Hawkeyes past the Illini, 15-7 after five innings, on April 3. The redshirt sophomore recorded a double and a triple in Iowa’s nine-run first inning before hitting a home run in the third and a single in the fourth. The San Pedro, California, native, became the first Hawkeye in school history to hit for the cycle and just the third player in the Big Ten to accomplish the feat. Gyerman posted career bests in hits (4), RBIs (6) and runs scored (3) in the contest.

UP NEXT
UI softball is fighting for one of 12 spots in the 2015 Big Ten Tournament. The Hawkeyes currently sit in12th place in the Big Ten Conference. The conference tournament is set for May 7-9 at Ohio State in Columbus, Ohio. The tournament schedule and seeds will be determined following the completion of all weekend conference games. Stay tuned to hawkeyesports.com for updates.