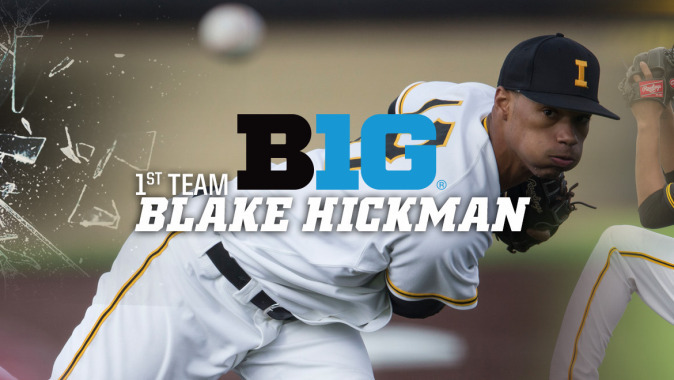 Hickman earned first-team honors; Toole, Mathews, and Hibbing were named to the second team; and Roscetti and Peyton were third-team selections.

Hickman, a right-handed pitcher from Chicago, is the first Iowa starting pitcher since 2004 (Nathan Johnson) to earn first-team recognition. The junior is 9-1 with a 2.75 ERA in 14 starts and is limiting hitters to a .207 batting average. Hickman went 7-0 in Big Ten play to tie for the league lead in wins, and has six quality starts.

The nine victories are the most by a Hawkeye pitcher since 2005 and are tied for the fourth-most in a single season in program history.

Toole earned his third career All-Big Ten honor, taking home second-team honors for the second time in his career. He was a third-team honoree as a junior. The outfielder and leadoff hitter has reached base safely in 50-of-52 games this season and ranks second in the Big Ten in steals (27) and sixth in hits (72).

The Council Bluffs, Iowa, native is hitting .321 with a .389 on-base and .393 slugging percentage this season. Toole is the Iowa record holder in career singles (203), while ranking in the top four all-time in hits (234) and steals (70). He is the first Hawkeye to earn three career All-Big Ten accolades since his brother, Justin Toole, from 2007-09.

Hibbing earned a spot on the second team — his first career honor — after going 2-1 with a 1.67 ERA and seven saves in 20 relief appearances during the regular season. The right-hander has 32 strikeouts to two walks on the year and hasn’t issued a walk in 36 2/3 innings, since the season opener against Kansas State on Feb. 13.

In Big Ten action, Hibbing was even better. He went 2-0 with a 0.74 ERA over 24 1/3 innings with 22 strikeouts to zero walks and limited opposing hitters to a .157 batting average. The Lindenhurst, Illinois, native tied for the league lead with six saves, and finished second in ERA and opposing batting average.

Hibbing is the first Iowa reliever to earn All-Big Ten honors since Tim Gudex in 2006.

Mathews garnered his first career all-league recognition after going 5-2 with a 2.08 ERA in 13 regular season starts. The right-hander ranks fourth in the conference with a 2.08 ERA and is holding batters to a .243 average — 11th-best. Mathews has allowed one earned run or fewer in 10 starts and a total of 15 runs as a starter this season.

Peyton is the first Hawkeye first baseman to earn All-Big Ten recognition since Brad Carlson in 2002.

Roscetti is a third-team selection at shortstop after enjoying a breakout conference season. After struggling at the plate for the first month and a half of the season, the Sherman, Illinois, native caught fire in Big Ten play, ranking in the top four in the league in batting average (.391) and hits (36). Overall Roscetti is hitting .314 with 23 runs and 25 RBIs. He is second on the team with 19 multi-hit games and is tied for the team lead with seven multi-RBI contests.

It is the second straight season an Iowa shortstop has earned all-conference recognition. Jake Yacinich was a first-team selection in 2014.

Senior Kris Goodman was selected as Iowa baseball’s Big Ten Sportsmanship Award honoree. The distinction is presented to student-athletes who display sportsmanship and ethical behavior, are in good academic standing, and demonstrate good citizenship outside of athletics.