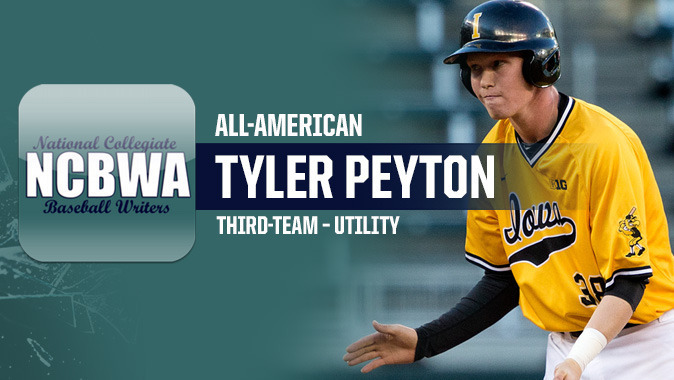 IOWA CITY, Iowa — University of Iowa junior Tyler Peyton has been tabbed as a third-team All-American by the National Collegiate Baseball Writers Association, it was announced Wednesday. Peyton earned the distinction as a utility player.

Peyton is the second Hawkeye to garner All-America honors this season, joining Blake Hickman, who was a Louisville Slugger third-team All-American. It is the first time since 1989 Iowa has had multiple All-America selections.

The Grimes, Iowa, native was a two-way star for the Hawkeyes in 2015.

Offensively, Peyton hit a team-best .337 with 31 runs and 31 RBIs. He tied for the team lead with 11 doubles and paced the squad with 34 walks. Peyton, one of 10 finalists for the John Olerud Two-Way Player of the Year Award and a third-team All-Big Ten selection as a first baseman, had 18 multi-hit games, seven multi-RBI games, and hit safely in 39 contests.