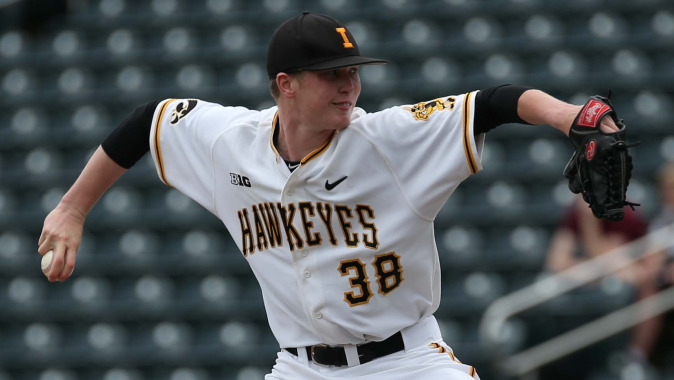 IOWA CITY, Iowa — Should he stay or should he go?

University of Iowa junior Tyler Peyton made a decision quickly — he wants to be a Hawkeye and earn a degree.

Peyton, a right-handed starting pitcher/first baseman, was so intent on returning for his senior season in 2016 that he told scouts not to select him in the 2015 Major League Baseball First-Year Player Draft. Yet, his name was called June 10 in the 33rd round by the Cincinnati Reds.

“Choosing between school and professional baseball was one of the most difficult decisions I have encountered,” said Peyton. “I feel that returning for my senior season is the right choice.

“It’s an indescribable feeling to be a Hawkeye, and I want to have one more year with this coaching staff and in this program. I’m focused on earning a degree from the University of Iowa; that played a big part in my decision.”

The Grimes, Iowa, native knows he is bypassing a chance at a sizable signing bonus, but his future as a Hawkeye was one he couldn’t let go.

“I couldn’t turn down the chance pitch and hit again for this team and these coaches,” said Peyton. “In pro ball, they only wanted me only as a pitcher. Playing professionally, you never know how it’s going to pan out, and that was in the back of my mind. I would like to have a degree to fall back on; that played a big part (in my decision).”

Peyton was Iowa’s best player as a junior, finishing with a 7-4 record with a 3.03 ERA on the mound. He logged a team-high 95 innings as the team’s Friday night pitcher and ranked in the top 12 in the Big Ten in ERA, innings, strikeouts, and wins.

Offensively, Peyton hit a team-best .337 with 31 runs and 31 RBIs. He earned third-team All-America honors as a utility player from the National Collegiate Baseball Writers Association and D1Baseball.com.

Peyton says Iowa’s 2015 success, which included a 41-win season and the school’s first NCAA Regional appearance in 25 years, also factored into his return.

“It sparked me,” he said. “The season we had and the team bonding and chemistry among the players, it brought me back for one more year.”

With nine seniors graduating, and fellow starting pitcher Blake Hickman electing to sign a professional contract, Peyton will be one of the team leaders in 2016. It’s a role he embraces.

“I feel like I have developed each year I have been here,” he said. “I am ready to take that giant step in leading this team and helping it succeed.

“I want to get to Super Regionals and to the College World Series. I know everybody that is a part of this program wants to do that, too. Even though we’re losing some firepower, we’re going to be good next year.”