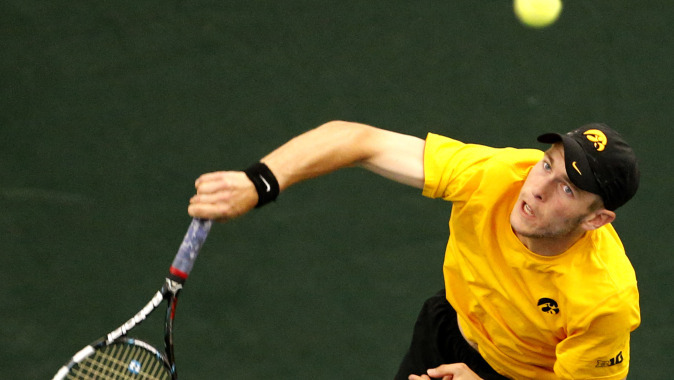 IOWA CITY, Iowa — University of Iowa men’s tennis returnees competed in four ITA Summer Circuit events this summer around the Midwest. Senior Dominic Patrick, junior Nils Hallestrand, and sophomores Jake Jacoby, Josh Silverstein, and Lefteris Theodorou all improved in preparation for the 2015-16 season, which begins in September. Check out their singles and doubles results from this summer below.

The duo of Patrick/Silverstein ran the table in the doubles main draw, as the top-seeded Hawkeye tandem won all four matches to win the tournament. Jacoby was paired with Alexander Pozo of Wildwood, Missouri, and the duo split the two matches they played.

Wichita, Kansas, July 11-13
Hallestrand, Jacoby, Silverstein, and Patrick competed in Wichita, July 11-13. For the second straight tournament, a Hawkeye reached the championship match. This time, Patrick won his first four matches before falling, 6-2, 6-4, in the championship match to top-seeded William Little of Baylor. Hallestrand won four singles matches, including a 14-12 third-set tiebreaker in the quarterfinals against Lloyd Bruce-Burgess before being bounced by teammate Patrick in the semifinals, 7-5, 6-3. Jacoby won his first three singles matches before losing to eventual champion, Little, in the semifinals. Silverstein blanked Steven Meers, 6-0, 6-0, in the second round before losing in the Round of 16.

South Bend, Indiana, July 18-21
For the second consecutive weekend, Hallestrand, Jacoby, Silverstein, and Patrick competed. Patrick had another stellar outing as the Hawkeye senior, seeded sixth in the 128-player field, won six singles matches to reach the championship, before falling to Notre Dame’s Nicholas Montoya, 6-4, 6-2, playing on Montoya’s home court. Silverstein, seeded 10th, won four matches before losing in the quarterfinals to Montoya in a third-set tiebreaker. Jacoby won one match, while Hallestrand lost one match.

In doubles, Silverstein/Patrick advanced to the championship after an 8-6 win in the semifinals. The Hawkeye duo lost in the finals to the Notre Dame tandem of Lawson/Montoya, 8-6. Hallestrand/Jacoby won three doubles matches before falling in the quarterfinals.

Bloomington, Indiana, Aug. 8-11
After returning from a summer of competition in Europe, Theodorou traveled to Bloomington, Indiana, to play in the ITA National Collegiate Summer Championships. The Hawkeye sophomore won two singles matches, both in third-set tiebreaker fashion, in the 128-player field. Silverstein also won two singles matches, while Patrick won one and Jacoby won a match in the consolation bracket.