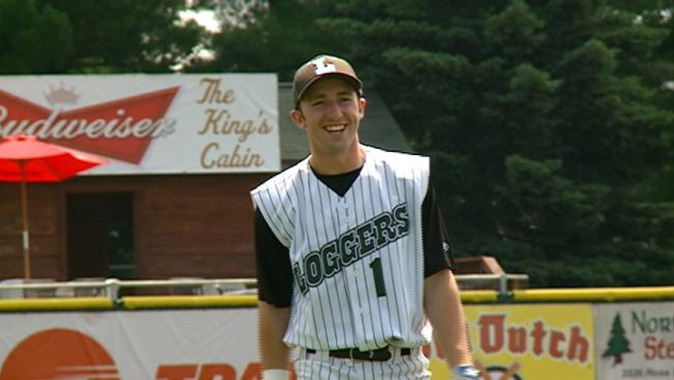 IOWA CITY, Iowa — University of Iowa junior Mason McCoy has been named a first-team summer collegiate All-American by Perfect Game, it was announced Wednesday. The infielder is the only player from the Big Ten Conference to earn first, second, or third-team honors.

McCoy, a transfer from Illinois Central Community College, tore up the Northwoods League in 2015, while competing for the La Crosse Loggers. McCoy was tabbed as the NWL Most Valuable Player after leading the league in hits, batting average, and runs scored.

The Washington, Illinois, native finished with a .367 batting average, collecting a single-season record 112 hits in 305 at-bats. He scored a record 80 runs, had 43 RBIs, and tallied 21 doubles, four triples, and nine home runs, and was 15-of-19 on the base paths, while playing in a league-high 71 games. His 21 doubles were second-most in the NWL, and his nine home runs ranked in the top-seven.

McCoy finished the summer with 36 multi-hit games, including five four-hit, eight three-hit, and 22 two-hit games. He hit safely in 55 games, finishing with a .417 on-base percentage and a .551 slugging percentage.

McCoy joins an Iowa program coming off a 41-win season, where it earned a berth into NCAA Regionals for the first time since 1990 and finished as the Big Ten regular season runner-up. McCoy is one of 16 newcomers on the 2016 roster, a recruiting class that is rated as the 18th-best class in the nation by Perfect Game.