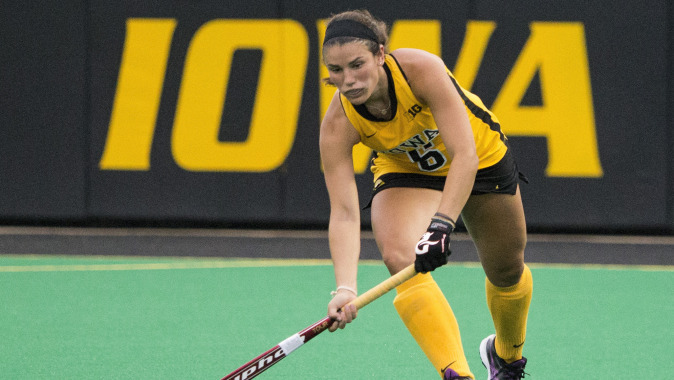 THIS WEEK
The 17th-ranked University of Iowa field hockey team opens the 2015 season this weekend at the annual ACC/Big Ten Challenge at Phyllis Ocker Field in Ann Arbor, Michigan. Iowa faces No. 11 Wake Forest on Saturday at 10:30 a.m. (CT), and concludes the weekend with a 10:30 a.m. (CT) contest against No. 2 North Carolina.

SCOUTING WAKE FOREST
Last year’s ACC champions head to Michigan coming off a 2014 season that saw the Demon Deacons finish 14-7 overall and appear in the NCAA Tournament. Head coach Jennifer Averill returns for her 24th season at the helm of the Wake Forest program. The Demon Deacons lost four-time All-American and 2014 ACC Offensive Player of the Year Anna Kozniuk and third-team All-American Georgia Holland due to graduation, but do return Christine Conroe and Jess Newak. The two seniors were both named to the NFHCA’s All-South Region Second Team last year.

WAKE FOREST VS. IOWA — THE SERIES
? Wake Forest leads the all-time series against Iowa, 9-6.
? In the first ever meeting between the two schools (2002), Iowa won, 1-0.
? The Hawkeyes have defeated the Demon Deacons in each of the last four meetings, including last year’s 4-1 victory in the ACC/Big Ten Challenge.

SCOUTING NORTH CAROLINA
The No. 2-ranked Tar Heels enter 2015 as the preseason ACC favorite coming off a 19-4 mark in 2014. North Carolina advanced to the semifinals of the 2014 NCAA Tournament. The Tar Heels are led by head coach Karen Shelton. Over the course of 32 years in Chapel Hill, Shelton has led North Carolina to six NCAA Championships, nine NCAA runner-up finishes, 18 ACC championships, and has over 550 career wins.

NORTH CAROLINA VS. IOWA — THE SERIES
? North Carolina leads the all-time series against Iowa, 24-3.
? The first match ever played between the two schools was in 1984 in Chapel Hill. The Tar Heels won, 2-1.
? The last time Iowa and North Carolina met was in last year’s ACC/Big Ten Challenge. The Tar Heels came out on top with a 4-1 victory.

HAWKEYES IN THE BIG TEN/ACC CHALLENGE
This year marks the 14th year of existence for the ACC/Big Ten Challenge, which began in 2002. The Hawkeyes are 4-4 in their last eight ACC/Big Ten Challenge matches. In last year’s event, Iowa defeated 11th-ranked Wake Forest, 4-1, before falling to second-ranked North Carolina, 4-1.

IN THE RANKINGS
Released on Aug. 25, the Penn Monto/National Field Hockey Coaches Association (NFHCA) Division I Preseason Poll has the Hawkeyes ranked 17th heading into the 2015 season. Iowa garnered 225 points in the rankings and is one of six ranked Big Ten schools — Maryland (No. 3), Penn State (T-7th), Northwestern (No. 10), Michigan (No. 14), and Michigan State (No. 19). Iowa has been ranked in the polls each week dating back to Sept. 6, 2011.

TO BE THE BEST YOU HAVE TO PLAY THE BEST
Eight opponents on Iowa’s 2015 schedule are ranked in the NFHCA’s Division I Preseason Poll released on Aug. 25, including No. 11 Wake Forest and No. 2 North Carolina who the Hawkeyes take on this weekend as part of the ACC/Big Ten Challenge.

LOOKING AHEAD
The Hawkeyes remain on the road next week when they head to Harrisonburg, Virginia, for a pair of contests. Iowa faces off against Richmond on Sept. 4 before squaring off with James Madison on Sept. 6.

2014 IN REVIEW
In her first season as head coach of the Hawkeyes, Lisa Cellucci directed an Iowa team that ranked as high as seventh nationally and averaged more than three goals per game. Natalie Cafone and Stephanie Norlander earned NFHCA Division I All-American accolades, becoming the 86th and 87th Hawkeyes in program history to earn national distinction.