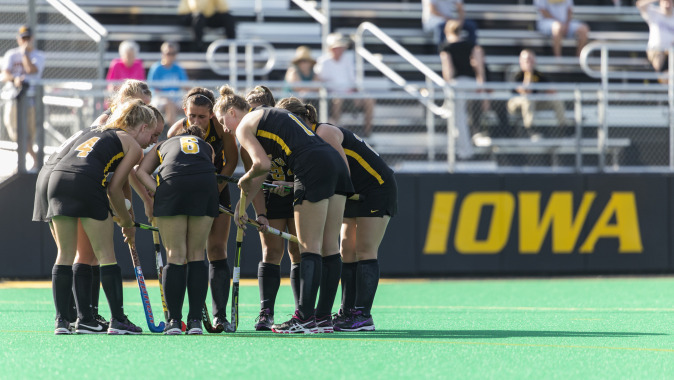 THIS WEEK
The 16th-ranked University of Iowa field hockey team is back at Grant Field this weekend for a pair of home contests. The Hawkeyes open the weekend with their first Big Ten contest of the season, taking on Rutgers on Friday at 3 p.m. (CT). Iowa concludes its home weekend with a matchup against Missouri State on Sunday at 1 p.m. (CT).

LIVE STREAMING
Iowa field hockey fans can follow all home contests via live stats (GameTracker) on hawkeyesports.com. Click on the “GT” link found on the field hockey schedule page to access the live stats feed. Fans can also follow @IowaFieldHockey for live in-game updates. Both Friday and Sunday’s contests will be streamed live on BTN Plus on BTN2go.com.

PROMOTIONS
? Friday is staff and faculty appreciation night. There will be free Iowa field hockey t-shirts for the first 75 fans.
? Sunday is Junior Hawk Club Day. Free hot dogs and ice cream sandwiches will be provided for Junior Hawk members. There will also be an autograph session with the players following the game.

SCOUTING RUTGERS
? Rutgers’ matchup against the Hawkeyes will be the team’s first road contest this season.
? The Scarlett Knights are on a two-game win streak and are outscoring their opponents 20-10.
? Rutgers has scored at least three goals in every game and leads the conference with 4.00 goals per game and 11.8 points per game.
?10 different players have scored for Rutgers, while three others have added at least one assist.
? Nicole Imbriaco leads Rutgers in scoring — the senior has recorded five goals and two assists for a career-best 12 points in 2015. She ranks 10th nationally, averaging one goal per game and is third in the Big Ten with 2.4 points per game.

RUTGERS VS. IOWA — THE SERIES
? Iowa is 5-0-1 all-time against Rutgers.
? In the first ever meeting between the two schools (1982), the Hawkeyes defeated the Scarlet Knights in overtime, 2-1.
? In last year’s meeting — Rutgers’ first season as a member of the Big Ten conference — the Hawkeyes blanked the Scarlet Knights, 3-0, in Piscataway.
?In six games between the two schools, Iowa is outscoring Rutgers, 21-4, and has recorded three shutouts (1986, 1992, 2014).

SCOUTING MISSOURI STATE
? Following a Thursday contest against Saint Louis, the Bears (1-4) travel to Iowa City for neutral site contest against Rutgers on Saturday and finish the weekend with a matchup against the Hawkeyes.
? Missouri State’s lone win of the season came at Davidson, when the Bears picked up a 2-0 shutout victory.
? Six different Bears have scored this season, led by senior Charlie Redhead who has two. ? Through five games, the Bears are giving up 3.6 goals per game, and have been outscored by opponents, 18-7.

LOOKING BACK
Last week the Hawkeyes hosted a trio of schools, including No. 5 Stanford, Kent State, and Saint Louis, in what was their first homestand of the 2015 season. The Hawkeyes went 2-1.

Iowa fell to Stanford in heartbreaking fashion on Sept.10, losing 3-2 via penalty corner with no time left on the clock. Junior Stephanie Norlander and freshman Makenna Grewe scored for the Hawkeyes.

The Hawkeyes went on to avenge their midweek loss by blowing out Kent State on Sept 12 (7-1) and Saint Louis on Sept. 13 (7-0). Seven different Hawkeyes scored in the two victories.

IN THE RANKINGS
Iowa is ranked 16th in the Penn Monto/National Field Hockey Coaches Association (NFHCA) Division I Poll, released on Sept. 15. The Hawkeyes garnered 225 points in the rankings and are one of four ranked Big Ten schools — Maryland (No. 10), Northwestern (No. 12), and Penn State (No. 18). Iowa has been ranked in the polls each week dating back to Sept. 6, 2011.

GREWE NAMED B1G FRESHMAN OF THE WEEK
Freshman Makenna Grewe was named Big Ten Conference Freshman of the Week by the league office on Tuesday. It is the first honor of Grewe’s career.

In three games this past week, Grewe scored three goals and recorded six assists, helping the Hawkeyes to victories over Kent State and Saint Louis.

On Sept 12, Grewe scored two goals and recorded two assists in a 7-1 victory over Kent State, her second two-goal game of the year. The Hawkeye forward has scored at least one goal in four of Iowa’s seven games and is tied for third in the conference with six goals on the year.

LOOKING AHEAD
The Hawkeyes hit the road next week for the start of a five-game road stretch beginning with Indiana on Sept. 25.