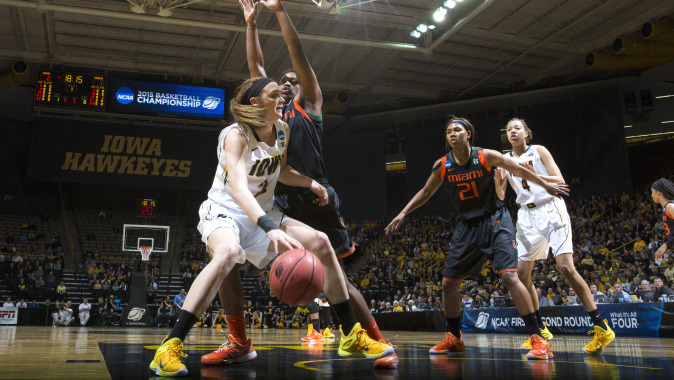 AUDIO COVERAGE
? Brent Balbinot and Kathryn Reynolds will call Friday’s season opener on Hawkeye All-Access.
? Balbinot is in his 12th season as Iowa’s play-by-play voice.
? Reynolds, a member of the infamous Core Four and team captain for the Hawkeyes in 2014-15, is pursuing a law degree at the University of Iowa.
? Balbinot and Hawkeye alum Stacy Schlapkohl (2005-08) will call the action Sunday on Hawkeye All-Access.
? Schlapkohl, who played in 104 games with 49 starts, helped Iowa to three NCAA Tournaments. She scored in double figures in 22 games.
? A link to the broadcast is available on the women’s basketball schedule page at hawkeyesports.com.

A LOOK AT NORTH DAKOTA
? North Dakota posted a 17-15 record overall and a 9-9 mark (5th place) in Big Sky Conference play in 2014-15.
? The team was picked to finish second in its conference by both the coaches and the media in the preseason. Senior forward Mia Loyd was named Big Sky Conference Preseason Player of the Year.
? North Dakota returns three players, all starters, from last season (Makailah Dyer, Loyd, Leah Szabla) and welcomes nine newcomers to its 2015-16 roster.
? The team is led by fourth-year head coach Travis Brewster, a native of Cedar Rapids, Iowa.

SCOUTING THE SKYHAWKS
? UT Martin went 22-11 last season, including a 16-0 mark to claim its third Ohio Valley Conference season title in the last four years.
? The Skyhawks, who have also won four-straight OVC tournament championships, fell in the first round of the WNIT in 2014-15.
? Seventh-year head coach Kevin McMillan has also led his team to NCAA Tournament appearances in 2014, 2013, 2012, and 2011.
? The Skyhawks return four, three seniors and one junior, from a season ago, and welcome six newcomers.

HAWKEYE CHALLENGE PROMOTIONS
? Iowa seniors will unveil the 2015 Sweet Sixteen banner in a pregame ceremony on Friday. The first 1,000 fans will receive a mini replica of the banner as a souvenir.
? Friday is Veterans/Military Appreciation Night and Sunday is Veterans/Military Appreciation Day.
? Iowa women’s basketball posters, schedule cards, magnets and keytags will be available at each contest.
? Friday and Sunday are basketball doubleheaders in Carver-Hawkeye Arena, with the men’s team playing after the women’s. Fans are welcome to stay for the men’s game.

CAREER STATS ALERT
? Junior Ally Disterhoft, a preseason All-Big Ten honoree, is nearing the 1,000 career point mark.
? The guard, who averaged 14.8 points per game as a sophomore, enters the season with 977 career points.
? Only 33 players have scored more than 1,000 career points in Iowa women’s basketball history.

HOME SWEET HOME
Iowa was one of 13 teams nationally to finish undefeated at home with an 18-0 mark last season, a program record for wins at home in a single season. The Hawkeyes look to extend their 18-game win streak on Mediacom Court inside Carver-Hawkeye Arena this year. The 2015-16 schedule includes 15 home contests, nine against Big Ten Conference opponents.

The Iowa City, Iowa, native enters the season 34th all-time in scoring at Iowa with 977 career points. Disterhoft — the only sophomore to be named a CoSIDA Capital One Academic All-American in 2014-15 — led the Hawkeyes in points (503) and points per game (14.8) last season. She has played in all 70 games of her collegiate career and scored in double digits in 45-of-51 starts.

LEADING THE WAY
? Senior forward Kali Peschel and junior guard Ally Disterhoft were elected team captains by the players and Hawkeye coaching staff.
? Peschel provided a spark for Iowa off the bench as a junior. She had the second-highest 3-point field goal percentage on the team last year. The Sauk Centre, Minnesota, native shot 43.4% from long range, which is the eighth-best in percentage in program history.
? Disterhoft, a two-year starter for the Hawkeyes, led the team in points and points per game in 2014-15. She enters the season with 977 career points, good for 34th in program history. The Iowa City, Iowa native, has played every game of her collegiate career with 51 starts.

TOP OF THEIR CLASS
? The freshman class, comprised of Tania Davis, Megan Gustafson, Tagyn Larson, and Hannah Stewart, earned a No. 17 national ranking by ESPN HoopGurlz. All were rated in the top 100 individually.
? Davis, a Michigan Miss Basketball honoree, was the 36th-best prospect nationally and the 12th-rated point guard in her class. The 5-4 freshman is expected to share point guard responsibilities this season.
? Gustafson, a 6-3 forward/center, is ranked 12th nationally at her position. She is the all-time leading scorer, male or female, in Wisconsin high school history.
? Larson is the 15th-rated wing nationally in the 2015 class. The 6-2 forward was a four-time all-state, all-city, and all-conference selection at Roosevelt High School.
? Stewart, a North Dakota Miss Basketball selection, is the 15th-ranked forward in the 2015 class. She is a four-time all-state, all-region, and all-district honoree, and a three-time state tournament MVP.

ACADEMIC PROWESS
? Iowa was the only program to have two Capital One Academic All-Americans, Ally Disterhoft and Samantha Logic, in 2014-15. There were 15 total honorees.
? Disterhoft was the only sophomore in the country to earn Capital One Academic All-American honors.
? Seven Hawkeyes, Disterhoft, Bethany Doolittle, Alexa Kastanek, Samantha Logic, Kali Peschel, Kathryn Reynolds, and Hailey Schneden, earned Academic All-Big Ten recognition following the 2014-15 season.
? To be eligible for Academic All-Big Ten, student-athletes must be letterwinners and be in at least their second academic year at the institution. They must also carry a cumulative grade point average of 3.0 or better.

HAWKEYES IN BIG TEN PLAY
Iowa head coach Lisa Bluder is a three-time Big Ten Coach of the Year (2001, 2008 and 2010). She has guided Iowa to 11 upper-division finishes in the Big Ten in 15 seasons. Iowa won a share of the Big Ten regular season championship in 2008 and finished in a three-way tie for second in 2009. The Hawkeyes clinched a share of the title in 2008 with a win at Wisconsin in the regular season finale (March 2, 2008).

A YEAR TO REMEMBER
The University of Iowa women’s basketball team closed the 2014-15 season with a 26-8 record overall, a runner-up finish in Big Ten Conference play with a 14-4 mark, and a No. 11 national ranking in the USA Today Top 25 Coaches’ Poll — the highest for the program since 1995-96 (No. 7 in AP, No. 9 in USA Today). The UI was one of 13 teams nationally to finish undefeated at home with an 18-0 mark, setting a program record for wins at home in a single season.

The Hawkeyes became one of 10 teams nationally to appear in the last eight NCAA Tournaments, and advanced to the program’s first Sweet Sixteen since 1996, and the sixth overall. It was the first Sweet Sixteen appearance in head coach Lisa Bluder‘s tenure.

#REDWHITENBLUDER
Sixteenth-year UI head coach Lisa Bluder took her talents to the international stage as head coach of the U.S. Pan American Women’s Basketball Team in 2015. She guided the Red, White, and Blue to four consecutive wins in four days to reach the gold medal contest, where Team USA ultimately fell to the Pan American Games host in Canada in day five of competition. It marked the 14th medal all-time (seven gold, five silver, two bronze) for the U.S. and the second for Bluder, who earned a gold medal with the team as an assistant coach at the World University Games in 2001.

BUTTENHAM REPRESENTS CANADA
Sophomore forward Christina Buttenham was one of 12 named to the Canadian Junior Women’s National Team for the second consecutive year in 2015. The Hamilton, Ontario, Canada, native was unable to compete with the team, which finished eighth in the competition held in Chekhov, Russia, due to injury. Buttenham was one of just 12 women’s basketball players in the Big Ten selected to represent the conference in international competition.

WATCH THE HAWKEYES
Twenty of Iowa’s contests can be seen on BTN, BTN Plus, or ESPN2 this season. Nineteen games will appear on BTN or digitally on BTN Plus, and while Iowa’s regular season contest against Maryland in Iowa City on Jan. 10 will be televised by ESPN2.

UP NEXT
Iowa continues its home stand with a 7 p.m. (CT) midweek matchup against Western Illinois on Thursday, Nov. 19, before hitting the road for five consecutive road games (at UNI, vs. Wright State, vs. George Washington, vs. Houston, at Virginia).