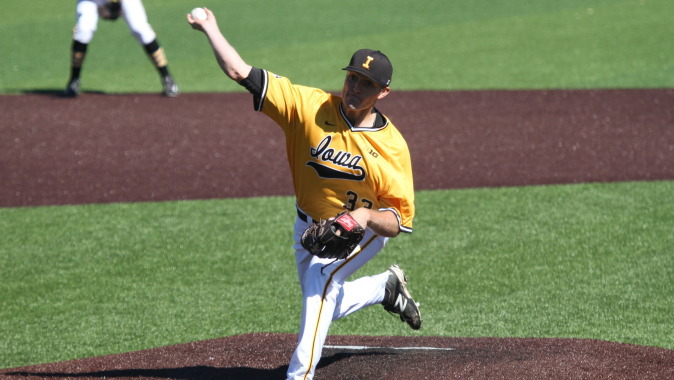 IOWA CITY, Iowa — The anticipation for C.J. Eldred’s collegiate debut with the University of Iowa baseball program has been three years in the making.

Eldred, a sophomore right-handed pitcher, redshirted during his freshman season at Indiana University before transferring and sitting out the 2015 season because of NCAA regulations.

“Pitching at the collegiate level is something I have been looking forward to since I was a kid,” said Eldred, a Mount Vernon, Iowa, native. “Here I am three years into college and I am finally going to get my first shot.”

Eldred trained with the Hawkeyes during the fall after transferring to the UI following the 2014 season, but once spring rolled around, he wasn’t on Iowa’s official team roster during the 41-win and NCAA Regional-qualifying season.

That meant Eldred wasn’t a part of team practices and wasn’t involved in any day-to-day team activities.

“That was difficult not being a part of the team,” he said. “They are my second family, and at times your first family because you’re with them every day, almost year-round. It was hard having to sit in the stands (during games) when you know everybody in that dugout and you know you could be helping them win games.

“It was the first time I wasn’t a student-athlete since I was in sixth grade.”

The baseball void made Eldred hungrier and made him more motivated for his return to the mound in 2016.

“Everybody says to play like it’s your last day, and I got a taste of what my last day could be like,” he said. “It makes you realize as much as you’re with this game, it can leave you quickly in so many different circumstances. This year I am fired up to get the season started.”

Eldred is competing for a spot as Iowa’s Saturday starter along with junior Ryan Erickson, sophomore Nick Gallagher, and freshman Shane Ritter. It’s a role Eldred wants to fill, but at the end of the day, it’s not an end all.

“He attacks hitters, which is what we preach to our guys,” said Heller. “He’s not a hard thrower in today’s sense, but he will run it up into the upper 80s (miles per hour). His strength is his sinker; he gets a lot of ground balls and lets his defense play behind him.”

Eldred has a baseball pedigree. His father, Cal, pitched for the Hawkeyes from 1987-89 before being a first-round Major League Baseball selection by the Milwaukee Brewers. Cal pitched in the Major Leagues for 14 seasons with the Brewers, Chicago White Sox, and St. Louis Cardinals.

When C.J. slides on his uniform for the first time Feb. 19, he will be the second Eldred to pitch and wear the No. 33.

“It was one of my hardest decisions to not come (to Iowa) out of high school,” said Eldred. “It’s special to come back and be at a place where my dad was able to play.

“I wasn’t aware of the number (when I got here), but (UI equipment manager) Kevin Foor made sure I had it. It is special to be able to follow in my dad’s footsteps and to compete for a program that my family has so many ties to.”

The Hawkeyes open the 2016 season at Dallas Baptist from Feb. 19-21 in Dallas. Iowa’s home opener is March 8 or March 9 against Northwestern (Iowa) College at Duane Banks Field.