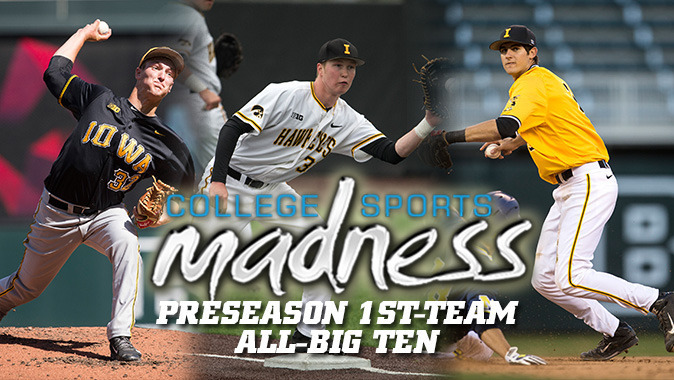 Mathews was one of three starting pitchers selected to the first-team, while Peyton and Roscetti were named infield honorees.

Peyton, a third-team All-American as a junior, led the team with a .337 average with 31 runs and 31 RBIs. The Grimes, Iowa, native had 18 multi-hit games and seven multi-RBI contests. Peyton posted a .439 on-base percentage, ranking fourth in the Big Ten. He hit .388 and had a .495 on-base clip in league games.

Roscetti, a third-team All-Big Ten honoree as a junior, started 55 games at shortstop, hitting .303 with 27 runs and 27 RBIs. The Sherman, Illinois, native finished with a .391 mark in Big Ten play to rank fourth in the conference. He had 36 hits in league play to rank second. Roscetti tallied 21 multi-hit games in 2015 and led the team with eight multi-RBI contests.

The Hawkeyes, who are receiving votes in the initial USA Today Coaches Poll, open the 2016 season Feb. 19-21, traveling to the Lone Star State to face Dallas Baptist.