Booker Eyes a Bounce Back 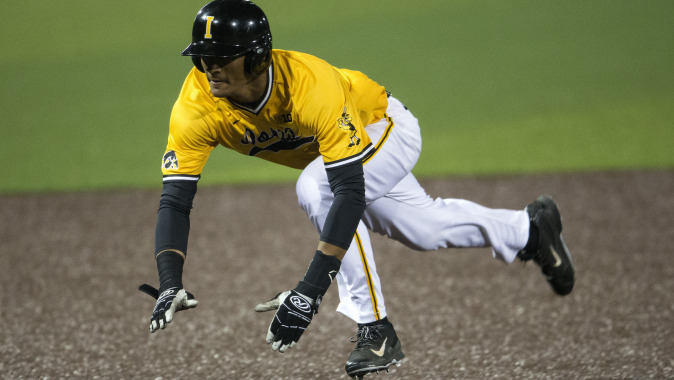 IOWA CITY, Iowa — Joel Booker’s first season with the University of Iowa baseball program was a learning process, and it made him better.

For the first time in Booker’s career, baseball didn’t come easy. The season started strong for the outfielder, as he hit in the .340 range for the first five weeks of the season. But once the book got out on Booker his offensive numbers dipped. He finished the season with a .235 average with 28 runs and 25 RBIs in 59 games.

“Last season motivates me,” said Booker, a Columbus, North Carolina, native. “I learned there is a lot I need to work on to be a successful baseball player. There were things I used to be able to get away with that now I’m not. There is more strategy that goes into the game than just going out there. You have to put in the time, effort, and focus.”

Booker returned to the Hawkeyes in the fall as one of four returning positional starters, and his attitude and willingness to work has changed.

“Since the fall started, it’s a different Joel Booker than was here last year,” said UI head coach Rick Heller. “He has worked a lot harder on his game, mechanics, cleaning things up, and being a better bunter. All of those things that can take him to a new level as a player.”

For all of his offensive struggles, Booker didn’t let it affect him defensively in 2015. He was a difference-maker in the Iowa outfield and was the Hawkeye pitching staff’s best friend.

“Even though he wasn’t having the year he wanted offensively, he was still a force in the outfield,” said Heller. “He made so many amazing plays that helped us win baseball games. That was a positive for me; he didn’t take the struggles at the plate to the field, which a lot of guys do.”

Booker is in line to move to centerfield in 2016, where he’ll replace four-year starter Eric Toole.

“I have big shoes to fill, but I am excited,” said Booker. “I can go out and utilize my speed.”

Heller says the key to the 2016 season will be how Booker deals with adversity.

“His outlook on things is better; he has a plan for dealing with things when they don’t go his way,” said Heller. “But the key to the season will be how much better has Joel gotten in the mental game?

“He has improved everything he needed to on the physical side, his overall game looks to be better, and he looks more confident. The mental game is tough, and dealing with failure is not easy, but I think Joel has a new perspective on things.”

The difference is Booker has experienced the struggles; he knows what it takes to succeed. It is why Heller is optimistic big things are in store for his outfielder in 2016.

“His all-around game has improved over the past year,” said Heller. “It could be a great year for him.”

The Hawkeyes open the 2016 season at Dallas Baptist on Feb. 19. Iowa’s season opener is March 8 against Northwestern (Iowa) College at Duane Banks Field.