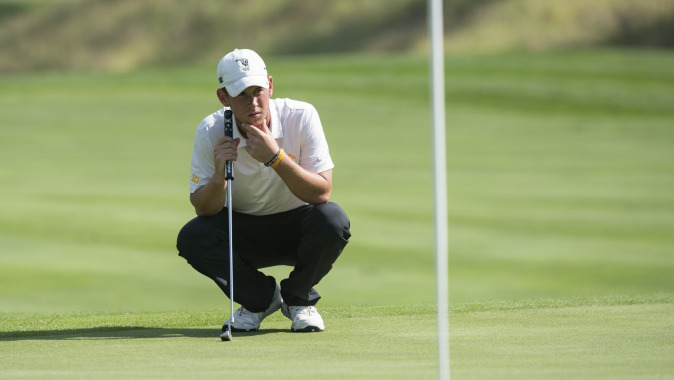 THIS WEEK
After nearly three-and-a-half months off from competition, the University of Iowa men’s golf team begins its 2016 spring campaign at the eighth annual Big Ten Match Play Championships in Palm Coast, Florida, this weekend. Held at the Hammock Beach Resort, the two-day event begins on Friday, Feb. 12 and will be played on the Tom Watson designed Conservatory Course.

FORMATTING CHANGE
This year, all matches will be split into divisional play and each team will have six members competing in each match. The first three rounds of the championship will be round robin, with each team collecting points for Saturday’s final round.

THE COURSE
All four rounds of the Big Ten Match Play Championships will be played on Tom Watson’s Signature design Conservatory Course, which is currently ranked the longest and toughest course in the state of Florida. The Conservatory plays as a 7,776 yard, par 72, and is highlighted by waterfalls and veneered field stone work.

LAST YEAR AT THE BIG TEN MATCH PLAY CHAMPIONSHIPS
In 2015, the Hawkeyes earned their second third place finish in three years. As the No. 3 seed, the Hawkeyes swept Nebraska, 5-0, in the first round and topped Minnesota, 3-1-1, in the second to advance to the semifinals against Michigan. Iowa fell to the Wolverines, 4-1-0, but would go on to defeat fourth-seeded Maryland in a battle for third place via tiebreaker. Ian Vandersee led Iowa with a 3-0-1 record at the two-day event.

THE LINEUP
With six players competing in each match, Iowa will rotate its lineup throughout the event. Traveling for the Hawkeyes will be seniors Voramate Aussarassakorn and Nate Yankovich, juniors Raymond Knoll and Carson Schaake, sophomore Sam Meuret, and freshmen Aaron DeNucci and Matthew Walker.

WALKER, THE FRESHMAN
Walker became the first true freshman to compete in every fall tournament for the Hawkeyes since Cole Peevler in 2005. The Ottumwa, Iowa, native competed in four events, averaging 73.67 strokes per round. He carded an even par 72, his lowest 18-hole score of the year, at the GolfWeek Conference Challenge. Walker’s best finish came at the David Toms Intercollegiate where he fired a three-round 228 (+12) to tie for 28th.