Hawkeyes Down SHSU in 6, Fall to Louisville 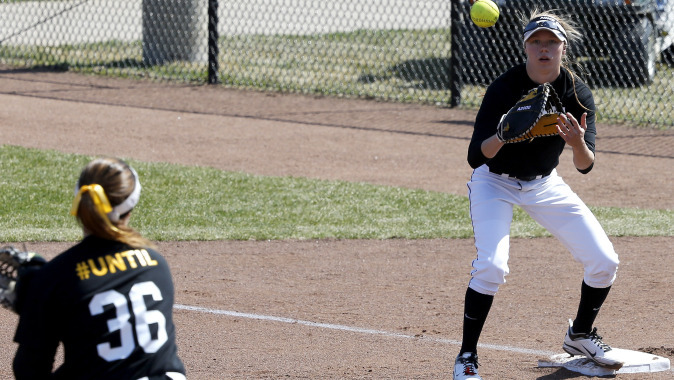 CORPUS CHRISTI, Texas — The University of Iowa softball team bounced back from a morning loss to Louisville (7-2) with a run-rule victory over Sam Houston State (8-0) on Saturday afternoon at Chapman Field.

“I liked the bounce back,” said UI head coach Marla Looper. “In the first game we struggled a little bit in the circle and offensively. The challenge when we get to these weekends is that we have to be able to turn it around. We came out more explosive in the second game. We had a lot more runners on base, and we took advantage of opportunities.”

Freshman Mallory Kilian notched the first win of her Hawkeye career in the circle. The Fort Dodge, Iowa, native allowed just two hits and a walk. She struck out four in six scoreless innings.

“Mallory came in today and threw a really good ball game,” said Looper. “There are still some areas where she has to get better, but compared to yesterday she got back on the horse and road with confidence.”

The Hawkeyes got on the board in the bottom of the third inning. Sophomore Katy Taylor led off the inning with a walk before junior Kaitlyn Mullarkey sent a double to left. Redshirt junior Sammi Gyerman loaded the bases with a walk, before junior Claire Fritsch plated a run with a groundout to first. With runners on second and third and one out, sophomore Daniella Ibarra plated Mullarkey with a perfectly executed sacrifice squeeze. After a walk, Gyerman scored on a fielder’s choice off the bat of sophomore Cheyenne Pratt to give the Hawkeyes a 3-0 lead.

Iowa took advantage of three Bearkat errors in the fourth. A pair miscues and a walk put two runners on for Gyerman who sent a two-run double to left. One batter later, Mullarkey scored on a wild pitch to extend the Iowa lead to 7-0.

After a scoreless fifth, the Hawkeyes scored the game-ending run in the top of the sixth. Mullarkey led off the inning with a triple to left — her second hit of the game — before Fritsch sent a single up the middle to secure the 8-0 run-rule victory.

Six of Iowa’s seven hits came from its two-three-four hitters. Mullarkey, Gyerman, and Fritsch went a combined 6-for-9 with two hits apiece.

Louisville got the bats going early in game one, plating three runs in the top of the first inning off of three hits and an error.

The Hawkeyes got one back in the bottom of the first. Mullarkey got hit by a pitch to lead off the inning. Taylor followed with an infield single to short. After a battle at the plate, senior Holly Hoffman sent a single through the left side to load the bases. A wild pitch allowed Mullarkey to score to bring the Hawkeyes within two, 3-1.

The Cardinals tacked on another run in the second. The Louisville leadoff hitter started the inning with a single, moved to second on a sacrifice bunt, and scored on an RBI single to right to put the Cardinals ahead 4-1.

Iowa struck back in the third. Taylor led off the inning with her second single of the game. A Gyerman ground ball moved her to second before Fritsch sent an RBI single up the middle to make it 4-2.

After two scoreless innings, the Cardinals added a run in the fifth and two in the sixth to extend their lead to five. They remained in control from there, going on to win 7-2.

“We’ve seen Corpus already,” said Looper. “I’d like to come out and attack from the get go. We know that we are in control of our attitude, effort, and energy. If we bring that and not get ahead of ourselves, then we have a good chance of getting a good outcome.”