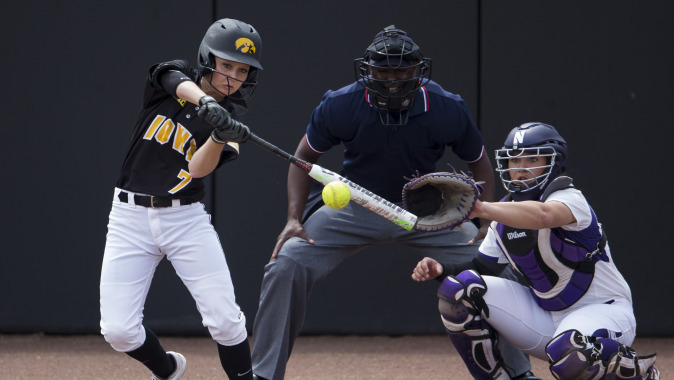 ROSEMONT, Ill. — The University of Iowa softball team fell to Lipscomb, 7-0, and Loyola-Chicago, 4-0, on Saturday afternoon. The Hawkeyes drop to 3-6 on the season following day two of the Total Control Sports Invitational.

Runners left on base haunted the Hawkeyes in both games. Iowa stranded a combined 19 runners (10 against Liscomb, 9 against Loyola) on the day.

“We have to give ourselves opportunities to get in hitters counts,” said UI head coach Marla Looper. “That’s where we struggled. We got runners on and then we got too anxious. We have to do a better job of taking care of the things we can control.”

In game one, the Bison plated their first run in the bottom of the third on a pair of singles and a throwing error. Senior right fielder Erin Erickson helped the Hawkeyes minimize the damage, gunning down a Bison at home plate.

After a scoreless fourth, the Bison put five runs on the board in the bottom of the fifth. Four hits, including a grand slam and a triple, and an error gave Lipscomb a 6-0 lead. The Bison added their final run in the bottom of the sixth. Lipscomb used a pair of singles to secure the 7-0 win.

Elizabeth Wiegand (2-2) took the loss in the circle. The junior allowed six runs (three earned) on seven hits and a walk. She struck out one. Shayla Starkenburg pitched an inning and two-thirds in relief. She allowed one earned run on two hits and a walk. The redshirt junior struck out two.

Sophomore shortstop Katy Taylor led the Hawkeyes at the plate. The Owasso, Oklahoma, native went 2-for-4 with two singles and a pair of stolen bases.

Loyola came out swinging in game two, scoring three runs in the bottom of the first inning. The Ramblers used a walk, sacrifice bunt, two singles, double, and an Iowa fielding error to take a 3-0 lead.

The Ramblers scored their final run in the third. A pair of doubles and a single extended the Loyola lead to 4-0.

The Hawkeyes put runners on bases in six of seven innings, but could not come up with a timely hit. Juniors Claire Fritsch and Katelyn Mullarkey each recorded hits for the Hawkeyes.

“In the circle, we have to pound the zone early and keep the ball down,” said Looper. “We got the ball elevated today and it hurt us.” The Hawkeyes wrap up Total Control Sports Invitational action tomorrow with an 11:30 a.m. (CT) contest against Indiana State.

“Fortunately, it’s still early in the season,” said Looper. “We have to get better and make those adjustments sooner. I’m looking for us to come out tomorrow and start fresh. We have to continue to build off of this.”