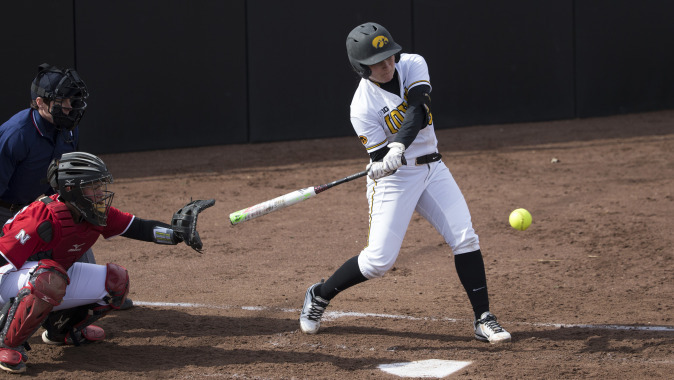 CONWAY, S.C. — The University of Iowa softball team lost a back-and-forth battle to Coastal Carolina, 10-8, on Saturday morning. The Hawkeyes fall to 4-9 on the season with the loss, while the Chanticleers improve to 5-7.

“It came down to throwing strikes in the circle,” said UI head coach Marla Looper. “Unfortunately we didn’t take advantage of our leads when we had them. We walked too many batters. When you keep doing that, you put yourself on your heels, and it’s hard to bounce back from that.”

The Hawkeyes found the scoreboard quickly, plating two runs in the top of the first inning. Junior Claire Fritsch led off the inning with a double down the left field line, and junior Kaitlyn Mullarkey followed with a walk. A groundout by sophomore Anglena Schmiederer advanced both runners, before senior Holly Hoffman delivered a two-run single to right to give the Hawkeyes a 2-0 lead.

Coastal Carolina tied it up in the bottom of the first. The Chanticleers plated two runs on three hits to knot the game, 2-2.

After a scoreless second, the Hawkeyes regained the lead in the third. Fritsch and Mullarkey led off the inning with back-to-back walks, and redshirt junior Sammi Gyerman advanced them both on a groundout. With runners on second and third and one out, Schmiederer put down a bunt. The Chanticleers gunned down Fritsch at the plate on a squeeze attempt, but Schmiederer drew a throw advancing to second allowing Mullarkey to score. Redshirt senior Holly Hoffman kept the inning alive with a walk, before freshman Mallory Kilian sent an RBI single up the middle to give Iowa a 4-2 lead.

The Chanticleers came storming back, plating three runs in the bottom of the fourth. Coastal Carolina used a walk, single, and a three-run home run to left to take a 5-4 lead.

The Hawkeyes answered in the fifth, plating four runs. Back-to-back singles by Whitney Repole and Cheyenne Pratt put two on for Hoffman. The redshirt senior registered her third RBI of the game with a single to right to tie the game, 5-5.

Sophomore Allie Wood continued the rally, plating a run on a single to right. With runners on first and third, Wood stole second. The throw down allowed senior Haley Hansel — who was pinch-running for Hoffman — to score. Sophomore Ashley Yoways reached base on a throwing error by the Chanticleer shortstop, and sophomore Katy Taylor sent a single to left to load the bases. An RBI walk by Fritsch followed to extend the Iowa lead to 8-5.

Coastal Carolina responded in the bottom of the inning. The Chanticleers used a double, single, error, and four walks to plate five runs and ultimately win the game 10-8.

“We need to pound the zone early in the circle, and stop leaving runners on base offensively,” said Looper. “We left too many chances out there this morning.”

The Hawkeyes return to action this afternoon with a 3 p.m. (CT) contest against Georgia Southern.