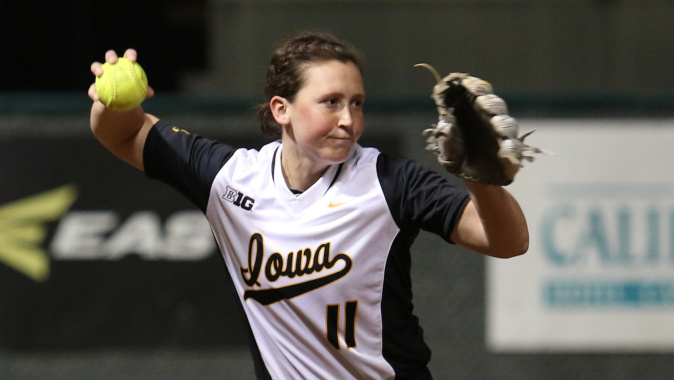 HONOLULU — Hawaii used a walk-off single to defeat the University of Iowa softball team, 5-4, on Friday evening in Rainbow Wahine Classic action. With the loss, the Hawkeyes fall to 7-16 on the season, while Hawaii improves to 15-15.

“We left too many runners on base (9 LOB),” said UI head coach Marla Looper. “We hand some moments where we were all over the pitcher and other moments that we weren’t. That’s the frustrating part. Our team has the heart, now we just have to dig a little bit deeper to fight through and keep ahold of these games.”

The Hawkeyes found the scoreboard first, plating three runs on three hits and a pair of Rainbow Wahine errors in the top of the fourth. Redshirt junior Sammi Gyerman and senior Holly Hoffman both reached on errors to lead off the inning. One batter later, sophomore Angela Schmiederer sent and RBI double to left to give Iowa a 1-0 lead. Senior Whitney Repole continued the rally with an RBI single to left, before Erin Erickson gave Iowa a 3-0 lead on an RBI groundout to short.

A solo home run to left in the bottom of the fourth pulled Hawaii within two runs, 3-1.

The Hawkeyes loaded the bases in the top of the sixth on a pair of singles (Erickson and junior Claire Fritsch) and a walk (sophomore Katy Taylor), but could not move a runner across the plate. The Rainbow Wahine used the momentum to push three runs across in the bottom of the sixth. Hawaii capitalized on three hits and an Iowa error to take a 4-3 lead.

Freshman Mallory Kilian knotted the game with one swing in the top of the seventh. The Fort Dodge, Iowa, native sent her second home run of the season over the left field wall to tie the game, 4-4.

“Mallory has kind of been everywhere for us,” said Looper. “She’s a pitcher/utility and we knew that coming in. She’s done a nice job of filing in where the team needs her.”

The Rainbow Wahine came right back in the bottom of the inning. After two quick outs, Hawaii’s leadoff batter Sarah Muzik drew a walk. It proved to be costly, as a stolen base moved Muzik to second and an RBI single to left gave the Rainbow Wahine a 5-4 walk-off win.

Kilian led the Hawkeyes at the plate, going 2-for-4 with a single and a home run. Junior Kaitlyn Mullarkey drew a walk in the first inning to extend her reached base streak to 21 games.

“We are learning, we are growing, and we can take this into tomorrow and into conference play,” said Looper. “We are seeing some positive things. We are going to get there; we just have to get there sooner rather than later.”