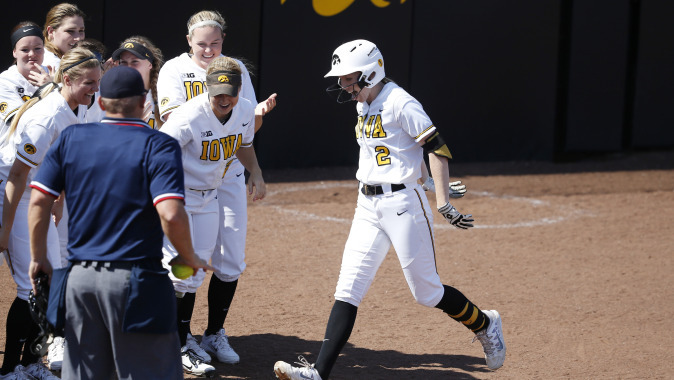 THIS WEEK
The University of Iowa softball team travels to Evanston, Illinois, for a three-game series against Northwestern this weekend.

SCHEDULE CHANGE
Friday’s game, originally scheduled for 4 p.m. (CT), has been moved to 3 p.m. to accommodate cold temperatures in the Evanston area.

LISTEN/FOLLOW ALONG
Live audio is available for all three games on Hawkeye All-Access at hawkeyesports.com. Play-by-play announcer Rob Brooks will call the action from Drysdale Field. Live stats are also available on the softball schedule page on hawkeyesports.com.

SCOUTING NORTHWESTERN
•Northwestern owns an 11-20 overall record and a 2-4 mark in Big Ten Conference action.
•Four Wildcats are hitting above .300, including senior Andrea Filler who leads the team with a .344 clip. Sophomore Sammy Nettling (.327), senior Amy Letourneau (.313), and sophomore Sabrina Rabin (.311) are also hitting above .300.
•Senior pitcher Kristen Wood leads the team with a 1.94 ERA in 11 appearances. Senior Amy Letourneau has the most appearances in the circle for the Wildcats. She owns a 3.51 ERA and a 5-7 record in 22 appearances.
•The Wildcats dropped 2-of-3 contests with Minnesota last weekend. Minnesota won the first two games (16-0 (5); 8-4), before Northwestern took the series final, 10-2, in five innings.

THE SERIES
•Northwestern owns a 55-52 advantage in the all-time series.
•The Wildcats won the series, 2-1, in Iowa City, Iowa, last season. Northwestern won the first two contests (1-0; 11-6), before the Hawkeyes won the finale 8-6.

IN THE RANKINGS – B1G
Four Big Ten teams appear in the ESPN.com/USA Softball Division I Softball Collegiate Top 25 poll released on March 8. No. 1 Michigan, No. 22 Minnesota, and No. 24 Ohio State are ranked within the top 25, while Nebraska is receiving six votes.

A DAY TO REMEMBER
Allie Wood registered a pair of home runs in Iowa’s last victory over Northwestern on May 3, 2015. The sophomore hit her first career grand slam in the bottom of the first inning, before registering a two-run home run in the top of the third. Wood plated a career-high 6 RBIs in the contest.

NORTHWESTERN TIES
Former Hawkeye Megan Blank is Northwestern’s volunteer assistant coach. Blank played for the Hawkeyes from 2012-2015, starting every game the Hawkeyes played during her tenure at shortstop. Blank broke or tied five school records in her senior campaign, including single-season batting average (.442), career batting average (.410), career doubles (63), doubles in a single season (20), and doubles in a game (3). Blank was a four-time NFCA All-Midwest Regional selection and first-team All-Big Ten pick. She was named to the conference’s All-Big Ten Defensive team in 2014 and 2015.

IN CONFERENCE ACTION
Three Hawkeyes are hitting above .400 in conference action. Redshirt senior Holly Hoffman and sophomore Sarah Kurtz are each hitting .400. Hoffman leads the team with 12 hits in 24 at bats — seven of her 12 hits are for extra bases. Sophomore Allie Wood has a .429 clip in eight conference games this season.

3-FOR-4
Sammi Gyerman led the team with a 3-for-4 effort at the plate against Purdue on April 2. The redshirt junior registered a single and a pair of home runs in the contest. She tallied four of Iowa’s seven RBIs in the contest. It marked the third time in her career she hit two or more home runs in a single game.

EXTRA BASES FOR HOFFMAN
Holly Hoffman hit .500 in two games against Purdue on April 2-3. The redshirt senior registered four hits in eight at bats. Three of her four hits were for extra bases. Hoffman went 2-for-4 with a home run and a triple on April 2, before registering a single and a double on April 3.

POWER SURGE
After registering 11 extra-base hits in all of 2015, junior Kaitlyn Mullarkey has hit 15 in 30 games this season. The Park Ridge, Illinois, native leads the team in home runs (5) and triples (3), and ranks second on the team in doubles (7) this season.

MS. UTILITY
Sophomore Angela Schmiederer has registered 22 starts at three different positions this season. She has made 11 starts behind the plate, seven in the outfield, and four as Iowa’s designated player. Six of Schmiederer’s 11 hits this season have been for extra bases, including a game-winning grand slam against Lamar on March 6.

INCREASED SPEED
•After stealing 18 bags in all of 2015, Iowa has swiped 43 bases in 32 games this season.
•Iowa is 43-for-49 on the base paths this season.
•Junior Kaitlyn Mullarkey leads the team with 10 stolen bases, while junior Claire Fritsch has nine.

ON DECK
The Hawkeyes return to Bob Pearl Field for a seven-game home stand from April 12-19.