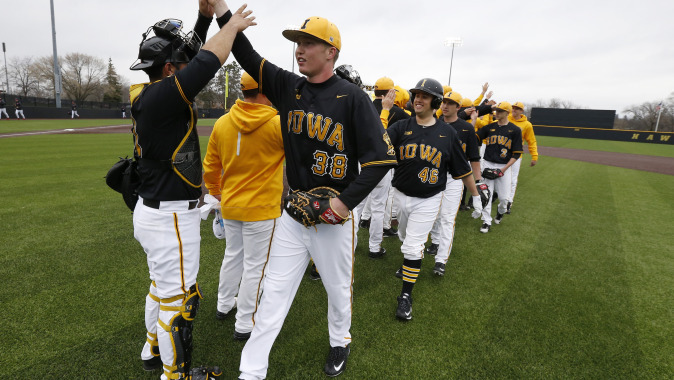 IOWA CITY, Iowa — The University of Iowa baseball team concludes its six-game home stand with a two-game midweek series against Air Force on April 12-13 at Duane Banks Field. Both games are slated for 6:05 p.m. (CT) starts.

During both games of the series military will receive free admission with an ID. Tuesday’s game is $2 Tuesday with tickets and popcorn both being $2.

The Hawkeyes are 14-15 overall after taking two of three games from Illinois last weekend. Iowa won the series opener, 4-3, in 10 innings before securing the series victory with a 4-3 win in the finale.

Air Force brings a five-game winning streak to Iowa City after downing Northern Colorado, 14-4, on April 5 before sweeping a four-game series against San Jose State. The Falcons scored at least eight runs in all five games.

Senior Calvin Mathews will start the series opener Tuesday. The right-hander is 0-3 with a 7.36 ERA in seven starts this season — all coming on Sundays. The Bloomfield, Iowa, native was a second-team All-Big Ten selection last season. Wednesday’s starter is TBA.

Air Force will send a pair of freshmen to the hill for their first career starts. RHP Matt Hargreaves will take the ball Tuesday; he is 1-0 with a 2.70 ERA in 10 relief appearances this season, allowing four runs (three earned) on five hits over 10 innings. He has nine strikeouts to two walks.

LHP Ethan Nichols will make his third appearance in game two. He is 0-0 with a 0.00 ERA this season, allowing two hits and zero runs in 2 1/3 innings. He has one strikeout and has issued two walks.

Senior Joel Booker has a .357 average at home with 15 hits, 12 runs, and 10 RBIs, while senior Nick Roscetti is hitting .317 with eight RBIs. Seniors Daniel Aaron Moriel, Jimmy Frankos, and Eric Schenck-Joblinske have all collected seven hits in 19 at-bats.

This week will be the third and fourth games in the all-time series against Air Force. The teams split a pair of games in 1999.

Both games against Air Force will be audio and video streamed online on Hawkeye All-Access with Brent Balbinot on the call. Following the midweek series, Iowa travels to Bloomington for a three-game series at Indiana from April 15-17.