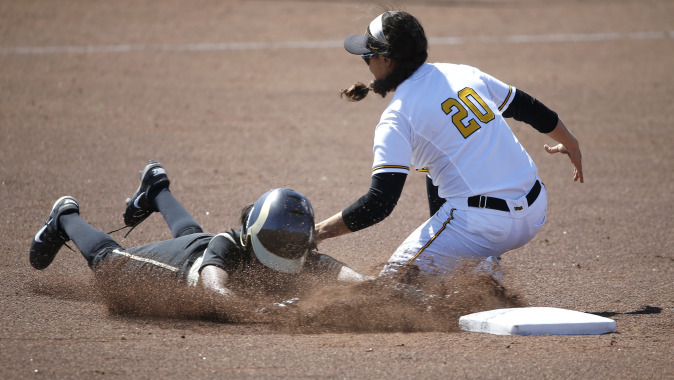 IOWA CITY, Iowa — The University of Iowa softball team hosts a pair of in-state rivals at Bob Pearl Field this week. Iowa will take on Northern Iowa on Tuesday, before welcoming Drake on Wednesday. Both games are scheduled to start at 5:30 p.m. (CT).

Tuesday is Facebook and Twitter Appreciation Night. Fans that present the coupon posted on Iowa Softball’s social media pages will be admitted free of charge. The first 100 fans will also receive a free t-shirt. On Wednesday, free pizza will be available for all fans (while supplies last).

Northern Iowa enters Tuesday’s game with a 27-12 overall record and a 6-4 mark in Missouri Valley Conference action. Nine Panthers are hitting above .300 this season, including Bailey Lange (.443). The freshman pitcher earned pitcher and newcomer of the week honors Monday. Lange hit .545 in four games last week, while recording a 0.50 ERA in two complete-game appearances.

Drake owns a 23-12 overall record and is undefeated in the Missouri Valley Conference at 11-0. The Bulldogs are off to their best start in league play behind sophomore pitcher Nicole Newman and senior Mariah McKinnon. Newman owns a 9-0 record and a 1.31 ERA in her last 10 appearances, while McKinnon is 2-0 with a 3.36 ERA in her last four starts.

Iowa owns a 35-13 advantage in the all-time series. The Hawkeyes and Bulldogs met twice last season. Drake won the first game, 8-0, in five innings at the UNI Dome Tournament on February 16, 2015, before outlasting the Hawkeyes, 1-0, in Des Moines on April 1, 2015.

Both contests will be audio and video streamed online via Hawkeye All-Access. Play-by-play announcer Austin Bramley will have the call on Tuesday, while Rob Brooks will call the action on Wednesday.

The Hawkeyes return to Bob Pearl Field on Friday for a three-game series against Wisconsin from April 15-17.