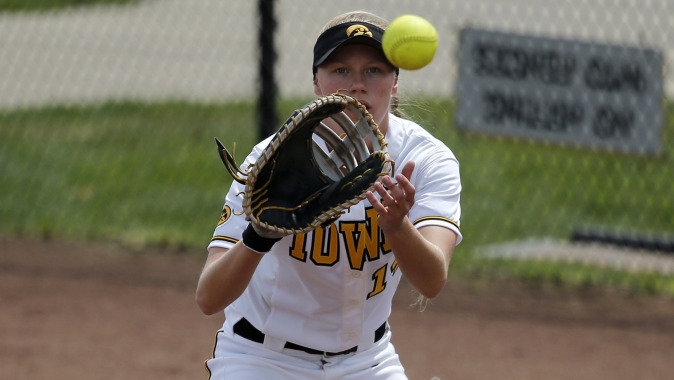 THIS WEEK
The University of Iowa softball team concludes the regular reason when it hosts No. 19/23 Minnesota on May 6-8. The Hawkeyes and Golden Gophers kick off the weekend with a 6 p.m. (CT) contest on Friday. The series continues with a 2 p.m. game on Saturday and concludes with a 1 p.m. matchup on Sunday.

LISTEN/FOLLOW ALONG
Live audio is available for all three contests on Hawkeye All-Access at hawkeyesports.com. Play-by-play announcer Rob Brooks will call the action from Bob Pearl Field. Live stats are also available on the softball schedule page on hawkeyesports.com.

PROMOTIONS
•Friday: The first 250 fans will receive a free Iowa softball cup.
•Saturday: The first 200 fans will receive free pizza. Saturday is also Kids Day and Alumni Day. An inflatable bounce house will be available for kids, and Iowa softball alumni will be honored before the game.
•Sunday: Senior Day. The Hawkeyes will honor their senior class following Sunday’s game.

SCOUTING MINNESOTA
•Minnesota owns a 35-12 overall record and a 16-3 mark in Big Ten action.
•The Golden Gophers are ranked No. 19 in the ESPN.com/USA Softball Collegiate Top 25 Poll and No. 23 in the USA Today/NFCA Division I Top 25 Poll.
•Seven Golden Gophers are hitting above .300 this season. Junior infielder Sam Macken leads the team with a .391 clip in 161 at bats.
•Sara Groenewegen owns a 1.87 ERA and a 25-5 record on the season. The junior is the reigning Big Ten Pitcher of the Week. She did not allow a hit and struck out 18 batters in nine innings against Maryland last weekend. She threw a no hitter on Friday and had a perfect game going through four innings on Sunday.
•Freshman Maddie Houlihan earned B1G Freshman of the Week accolades after hitting .857 last weekend.

IN THE RANKINGS – B1G
Four Big Ten teams appear in the ESPN.com/USA Softball Division I Softball Collegiate Top 25 poll released on May 3. No. 2 Michigan and No. 19 Minnesota are ranked within the top 25, while Ohio State and Nebraska are receiving votes.

LOOKING BACK
The Hawkeyes and Golden Gophers last met on May 8 in the second round of the 2015 Big Ten Tournament. Iowa pulled off the upset, defeating the second-seeded Gophers, 2-0. Shayla Starkenburg registered the complete-game shutout in the circle, allowing just two hits and striking out four. Holly Hoffman plated both of Iowa’s runs with a double in the top of the third inning.

MULLARKEY AT ILLINOIS
Kaitlyn Mullarkey led the team with a .429 clip in three games against Illinois last weekend. The junior registered three hits in seven at bats, including a double and two singles. Mullarkey reached base in all three contests.

IN HER HOME STATE
The Hawkeyes have played 11 games in the state of Illinois this season, including five at the Total Control Sports Invitational, three at Northwestern, and three at Illinois. Junior Kaitlyn Mullarkey is batting .406 in those games. The Park Ridge, Illinois, native has registered 13 hits, four home runs, two doubles, seven RBIs, and a .844 slugging percentage in her home state this season.

WIEGAND SILENCES NITTANY LIONS
Elizabeth Wiegand recorded a 1.56 ERA in nine innings pitched against Penn State from April 22-24. The junior earned the complete-game win in the circle on Saturday, April 23, allowing one earned run on five hits. She walked one and struck out two in seven innings of work.

HOFFMAN IN B1G ACTION
Holly Hoffman is swinging the hot bat for the Hawkeyes in conference action. The redshirt senior is hitting .407 in Big Ten play. In 20 conference games, Hoffman is slugging .763. She has registered 12 extra-base hits (7 doubles, 1 triple, and 4 home runs) during that span.

AROUND THE BIG TEN
•The Hawkeyes are sixth in the conference with 50 stolen bases.
•Iowa pitchers have struck out 83 batters looking this season — the second most in the Big Ten.
•Junior Kaitlyn Mullarkey is tied for third in the Big Ten with 12 hit by pitches, fifth in triples (3), and 11th in stolen bases (13).
•Redshirt junior Sammi Gyerman is tied for fifth in the conference with three sacrifice flies this season.

POWER SURGE
After registering 11 extra-base hits in all of 2015 (59 games), junior Kaitlyn Mullarkey has hit 21 in 48 games this season. The Park Ridge, Illinois, native leads the team in home runs (8), and triples (3), and is tied for first on the team in doubles (10).

INCREASED SPEED
•After stealing 18 bags in all of 2015, Iowa has swiped 51 bases in 49 games this season.
•Junior Kaitlyn Mullarkey leads the team with 13 stolen bases, while redshirt junior Sammi Gyerman has 10.