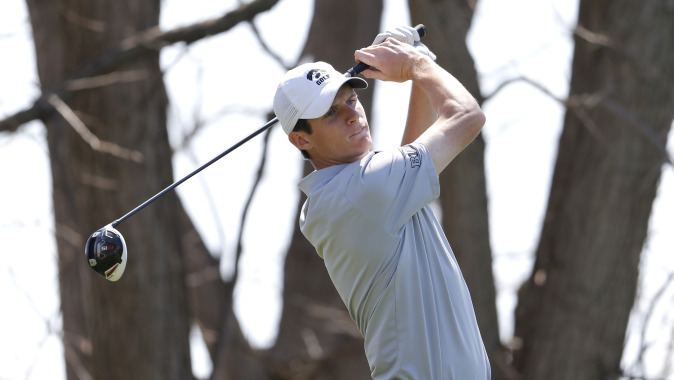 THIS WEEK
The University of Iowa men’s golf team travels to Albuquerque, New Mexico to compete at the NCAA Albuquerque Regional from May 16-18. The three-day, 54-hole tournament begins on Monday and will be played at the University of New Mexico’s Championship Golf Course. The Hawkeyes are the No. 10 seed in the 14-team field.

THE COURSE
Since it was officially opened in 1967, The Championship Golf Course has been one of the finest facilities of its kind nationwide. It has been recognized by Golf Digest Magazine as one of the top 25 public courses in the country and has been recognized by Golf Week Magazine for numerous honors, including being named the No. 7 Best Courses You Can Play State-by-State in 2015. Playing as a 7,562-yard, par 72, The Championship Golf Course has served as host to the Men’s Division I NCAA Championship three times (1976, 1992, 1998) and the Women’s Division I NCAA Championship twice (1987, 2008).

THE LINEUP
This weekend’s Hawkeye lineup includes senior Nate Yankovich, juniors Raymond Knoll and Carson Schaake, sophomore Sam Meuret, and freshman Matthew Walker. Yankovich, Knoll, Schaake and Walker have competed in every tournament for Iowa this season (27 rounds), while Meuret has competed in five (15 rounds). Both Knoll and Schaake will be competing in their third straight regional, while Meuret and Yankovich will each be competing in their second.

B1G IN THE POSTSEASON
Iowa is one of seven Big Ten teams to advance to regional competition this, joining No. 2 Illinois, Michigan, Michigan State, Northwestern, Purdue, and Penn State. Both the Boilermakers and Nittany Lions received votes in the latest GCAA Coaches Poll.

LAST TIME OUT
Led by three top 10 finishers, the Hawkeyes captured a second place finish at the Big Ten Championships, marking the fourth straight year the Hawkeyes have placed third or better at the event. Iowa finished the 54-hole tournament at 851 (-13; 285, 281, 285). Leading the way for Iowa were juniors Carson Schaake and Raymond Knoll. Both earned a spot on the All-Championships Team after notching fourth and fifth place finishes. Schaake carded a three-round 210 (-6; 70, 67, 73), while Knoll recorded a 212 (-5; 71, 74, 67).

HONORABLE HAWKEYE
Nate Yankovich became the 30th Hawkeye in program history and the third under second-year head coach Tyler Stith to earn All-Big Ten laurels. Yankovich was named second team All-Big Ten on April 26, marking the first all-conference recognition of his career. Iowa has now had at least one golfer earn all-conference honors in each of the last six years.

YANKOVICH HAVING BIG SENIOR YEAR
Senior Nate Yankovich is having the best season of his Hawkeye career. The Blacklick, Ohio, native has produced three top 10 finishes this season after only having two total in his previous three seasons combined. His third place finish at the Hawkeye Invitational in April marked the best finish of his career. Yankovich is also averaging 71.96 strokes per round this year, which leads the team and is 3.33 strokes better than last year’s average. Yankovich carded the best 18-hole and 54-hole scores of his career earlier this season. Yankovich has carded a six-under-par 66 two different times, with the most recent coming in the middle of March at the Schenkel Invitational. His best 54-hole score came in the fall at the Golfweek Conference Challenge where he fired a 209 (-7).

WALKER, THE FRESHMAN
Matthew Walker has competed in every event for the Hawkeyes this season and is the first true freshman to compete in every fall tournament for the Hawkeyes since Cole Peevler in 2005. The Ottumwa, Iowa, native has competed in all nine stroke play events this season and is averaging 73.85 strokes per round (27). Walker’s best performance of the year came at the Big Ten Championships, where he fired a three-round 213 (-3) to tie for sixth — a career best. The best 54-hole score of his career came in early April at the ASU Thunderbird Invitational, where he carded a 206 (-7; 69, 67, 70). Walker’s four-under-par 67 in the second round of the ASU Thunderbird Invitational was his lowest 18-hole score of the year.

OFF THE FIRST TEE
• Senior Nate Yankovich leads the Hawkeyes, averaging a career-best 71.96 strokes per round this season. Junior Carson Schaake finished with the second-best stroke average in program history last year (71.17)
• Iowa has had four different top finishers this season with Yankovich, Knoll, and Schaake each posting three apiece. Among Knoll’s top finishes is his first collegiate title at the GolfWeek Conference Challenge back in September.
• Iowa’s best finish of the season came at the GolfWeek Conference Challenge. The Hawkeyes took home the tournament title with a 54-hole 842 (-22).
• Iowa carded its lowest 54-hole total of the season at the ASU Thunderbird Invitational (April 2-3). The Hawkeyes put together a three-round 839 (-13; 277, 277, 285) which marks Iowa’s third lowest 54-hole score since 1985.
• Iowa’s lowest round of the season came in the second round of the GolfWeek Conference Challenge (273; -15). Yankovich and Schaake both carded a six-under-par 66 to pace the Hawkeyes.
• Yankovich and Knoll lead Iowa with a team-best 13 rounds of at or below par golf this season. Schaake follows right behind with 12, respectivley. As a team, the Hawkeyes have notched 54 rounds of at or below par golf this season.

A TEAM WITH DEPTH
This season, five Hawkeyes have combined for 12 top 10 individual finishes. Junior Carson Schaake leads the team with four, which includes a fourth place finish at the Big Ten Championships — his best finish of the year. Senior Nate Yankovich follows behind Schaake with three. Back in April, Yankovich notched a career best finish at the Hawkeye Invitational where he finished in third place. Junior Raymond Knoll — the Golfweek Conference Challenge co-medalist — and freshman Matthew Walker have each notched two top 10 finishes, while sophomore Sam Meuret has recorded one.

FALL RECAP
The Hawkeyes competed in four events during the fall season after the Royal Oaks Intercollegiate was canceled due to unplayable course conditions and potential flooding resulting from effects of Hurricane Patricia. The highlight of the fall came at Iowa’s own GolfWeek Conference Challenge, in which the Hawkeyes claimed the team title and junior Raymond Knoll earned co-medalist honors. As a team, the Hawkeyes averaged 75.25 strokes per round in the fall and tallied 15 rounds of at or below par golf. Junior Carson Schaake led the team with five, including a fourth place finish at the David Toms Intercollegiate.

A HISTORIC WEEKEND
• The Hawkeyes claimed the team title at the 2015 Golfweek Conference Challenge (Sept. 25-27), carding a 54-hole total of 842 (-22) — the fifth-best 54-hole score in program history. The title was the first for Iowa under the guidance of second-year head coach Tyler Stith, and first since winning the Hawkeye-GRE Invitational on April 13, 2014.
• Junior Raymond Knoll claimed co-medalist honors with a 54-hole total of 205 (-11; 66, 67, 72) — the lowest three-round total in program history. The title was the first of Knoll’s collegiate career. Knoll’s performance at the Golfweek Conference Challenge earned him Big Ten Co-Golfer of the Week honors on Sept. 30.
• Senior Nate Yankovich and junior Carson Schaake each finished within the top 10. Yankovich tied for fifth place with a three-round 209 (-7; 73, 66, 70). His second-round 66 was the best 18-hole performance of his career. Schaake tied for seventh, finishing the weekend with a three-round 210 (-6; 73, 66, 71).

A PROGRAM ON THE RISE
Iowa has won 12 tournaments since 2008 and has had 15 individual medalists since 2009, including Carson Schaake, who was crowned individual co-champion at the 2015 Big Ten Championships and Raymond Knoll who won this year’s Golfweek Conference Challenge. The Hawkeyes have also had three All-Americans since 2008. Nineteen Iowa players have been named to the all-region team since 2009. Last season, Brian Bullington, Knoll, and Schaake each earned Division I PING All-Midwest Regional honors.

LOOKING AHEAD
Should the Hawkeyes finish in the top five at the Albuquerque Regional, they will advance to the NCAA Championships, hosted by the University of Oregon in Eugene, Oregon. The six-day event begins on May 27 and will be played at Eugene Country Club. golf on Facebook and follow @IowaHawkeyeGolf on Twitter and Instagram.