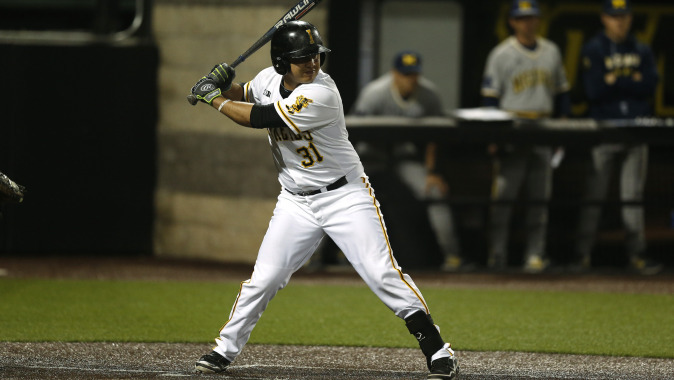 IOWA CITY, Iowa — The University of Iowa baseball team travels to Western Illinois on Tuesday to face the Leathernecks in its final midweek game of the season. First pitch is set for 1 p.m. (CT) from Alfred Boyer Stadium in Macomb, Ill.

The Hawkeyes enter the contest with a 24-24 overall record after taking two of three games from Michigan State last weekend at Duane Banks Field. Iowa’s pitching staff posted a 2.33 ERA in three contests and limited the Spartans to a .204 team batting average. Michigan State entered the weekend hitting .298.

Western Illinois has lost six of its last seven games, including a 10-4 loss at Iowa on May 3, to drop its record to 14-32 overall. The Leathernecks lost two of three games against Omaha last weekend in Macomb.

Iowa will send freshman right-handed pitcher Cole McDonald to the hill for his eighth start. The New Hampton, Iowa, native is second on the team with four wins, going 4-1 with a 2.95 ERA. He has allowed seven runs in 21 1/3 innings and has 23 strikeouts to four walks.

McDonald’s last appearance came May 3 against the Leathernecks. He lasted only two innings in a no-decision, allowing three runs on six hits, while fanning two.

Iowa took advantage of 10 walks and two Western Illinois errors to claim the first matchup in the series this season. Luke Vandermaten earned the win, allowing two hits over three innings of relief, while freshman Robert Neustrom and senior Nick Roscetti led the team offensively. Neustrom was 3-for-5 with an RBI, while Roscetti finished 2-for-4 with three RBIs.

The Hawkeyes are 8-0 in midweek games this season, but all eight contests have been played at Duane Banks Field. Iowa is 16-7 at home in 2016, but just 4-14 away from Iowa City.

Tuesday’s game will be audio streamed live on Hawkeye Radio Network and will be available on Hawkeye All-Access with Brent Balbinot on the call.

After Tuesday’s game, the Hawkeyes head to University Park, Pennsylvania, for a three-game series at Penn State. The series will be contested Thursday through Saturday at Medlar Field at Lubrano Park.