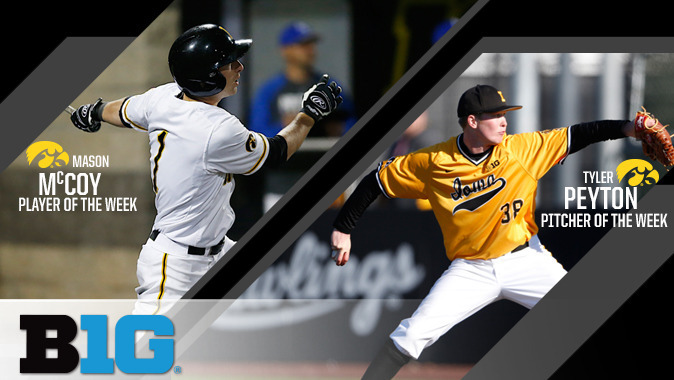 IOWA CITY, Iowa — University of Iowa junior Mason McCoy and senior Tyler Peyton were honored with weekly awards by the Big Ten Conference on Tuesday. McCoy was tabbed as the league’s co-Player of the Week, while Peyton was selected as the Pitcher of the Week.

McCoy, a Washington, Illinois, native, hit .500 (10-of-20) with a .500 on-base and .550 slugging percentage in leading the Hawkeyes to a 3-1 week. He finished with hits in all four games to extend his hitting streak to a career-best nine games and posted three multi-hit contests, scored six runs, and stole four bases.

The infielder opened the week with a four-hit game in Iowa’s 10-2 road victory at Western Illinois, finishing 4-for-5 with a double and two runs. McCoy tallied his second multi-hit game in Iowa’s Big Ten Tournament-clinching win in game two at Penn State, going 2-for-5 with two runs before closing out the weekend with a three-hit game for his 13th multi-hit contest of the season.

Peyton, a native of Grimes, Iowa, was dominant in Iowa’s 8-0 road victory at Penn State — a win that clinched the team’s third straight Big Ten Tournament appearance. He scattered three hits and faced four batters over the minimum in a complete game shutout — the second of his career — and he needed just 98 pitches.

The right-hander finished the game with four strikeouts without issuing a walk to win his third straight start and run his scoreless innings streak to 23.

The weekly honors are the first of McCoy and Peyton’s careers. Iowa has been recognized with four weekly honors in 2016 with Zach Daniels and Robert Neustrom garnering Freshman of the Week accolades.