University of Iowa defensive back Reggie Bracy is everything the Hawkeyes look for in a football student-athlete. He has not disappointed.

The 6-foot, 203-pound freshman from Mobile, Alabama, was recruited by Iowa running backs coach Derrick Foster who saw in Bracy more than an unselfish football player.

“It was his character,” Foster said. “He loved football and was a great person off the field.”

There was plenty about the Hawkeye program that interested Bracy. At the top of the list was honesty from coaches. 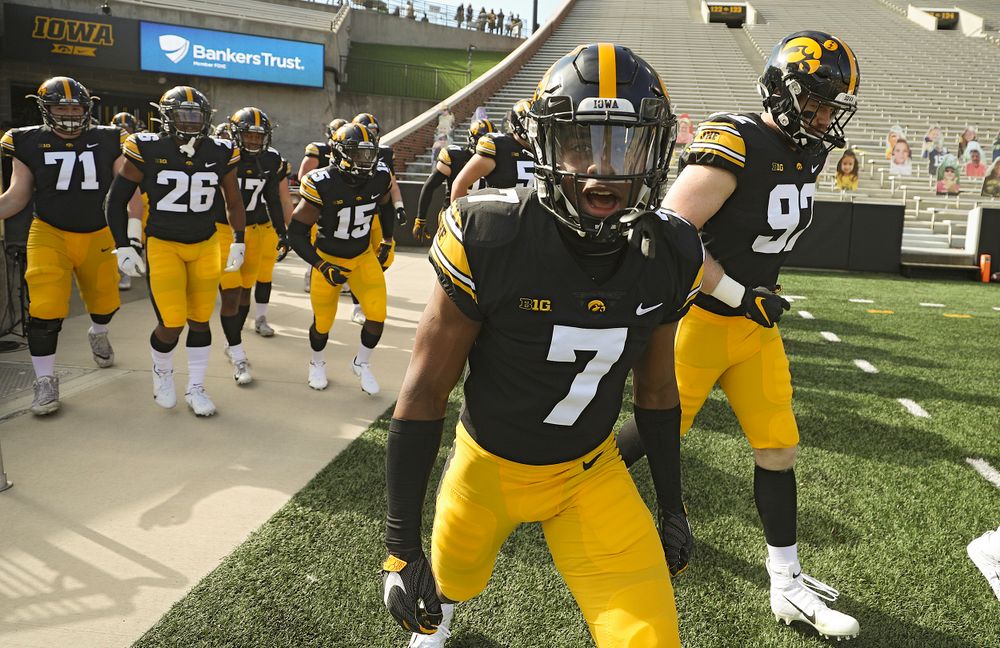 “Iowa kept it real and told me I had a lot of work to put in, told me how they would help me in this area, this area and this area. That intrigued me; the fact they knew I could get better and they saw potential in me.”

“When you’re being recruited, everybody comes to you and feeds you all these dreams,” Bracy said. “Iowa kept it real and told me I had a lot of work to put in, told me how they would help me in this area, this area and this area. That intrigued me; the fact they knew I could get better and they saw potential in me.”

Bracy has played primarily with the kickoff unit, but also saw snaps in the secondary during wins against Michigan State and Minnesota.

“Coach (Phil) Parker took a risk on me being a freshman and put me in there and I was able to make a couple plays,” Bracy said. “That was the highlight of my year so far.”

An all-stater as a senior at St. Paul’s Episcopal School, Bracy lettered in football, basketball and track. In four seasons, the Saints reached the state playoffs four times (while posting a record of 41-11) and won a Class 5A state title in 2017. Bracy was team captain as a senior and recorded 89 tackles, six tackles for loss, three sacks, seven pass break-ups and one interception.

At Iowa, he feels like the “young buck” in a secondary that includes mentors like junior Jack Koerner and sophomores Kaevon Merriweather and Dane Belton.

“They push me to get better and let me know I’m not there yet, which is what I need,” Bracy said. “My goal is to get better every day and hopefully one day I will get into that famous Iowa secondary.”

Through five games, Iowa’s defense ranks third in the Big Ten in scoring (allowing 16 points per game) and total defense (319.8 yards per game). Every day is a learning experience for Bracy. On Monday, his lesson had to do with tackling technique, on Tuesday it was about coverage.

“Every day you learn and grow,” Bracy said. “Every day is a new experience; I have so much to learn and I am eager to learn it.”

Iowa head coach Kirk Ferentz notices Bracy’s energy and is pleased with his performance at safety and on special teams.

“That is a good way for a young guy to get on the field and get experience without having to know everything on the defense,” Ferentz said. “This is a good time for him to start learning how we play. He is on the right track.”

Although Bracy didn’t know much about Iowa during the recruiting process, his uncle is friends with Desmond King, a Hawkeye alum and Jim Thorpe Award-winner who plays for Tennessee in the NFL. Like King, Bracy was excited and pleased to choose Iowa.

“Iowa City is a great city, I love it here,” he said. “It is a great college town and has a loving atmosphere.”

Bracy will play in his second trophy game of the season Friday when Nebraska comes to Kinnick Stadium for the Heroes Game. Kickoff is noon and the game will be televised by FOX.