Layoff is Over, What's Next?

Head coach Tom Brands opened his postmatch news conference Jan. 15 with the rhetorical question after his University of Iowa wrestling team picked up where it left off 45 weeks ago. Last March, the Hawkeyes won their 36th Big Ten championship in Piscataway, New Jersey, a few days before the sporting world came to a halt because of the coronavirus pandemic.

On Jan. 15, top-ranked Iowa won another Big Ten dual with a dominant display in front of a handful of parents and a few cardboard cutouts, dismantling No. 6 Nebraska, 31-6. The Hawkeyes won the first six bouts — three with bonus points — and owned an insurmountable 24-0 lead before the Huskers got on the board. Making the 25-point dual win more impressive is that Nebraska finished second at the 2020 Big Ten Tournament.

“I know they responded well to a long, long layoff,” Brands said. “But really, what’s a layoff? There is no layoff, these guys are all serious about the sport so that question has been answered. We can get better, we have to keep getting better.”

Top-ranked Spencer Lee got things started at 125 pounds with 81 seconds of mat time before recording a first-period fall, the 17th such fall of his career. Austin DeSanto followed at 133 with a 21-6 technical fall that included eight takedowns and a four-point nearfall. 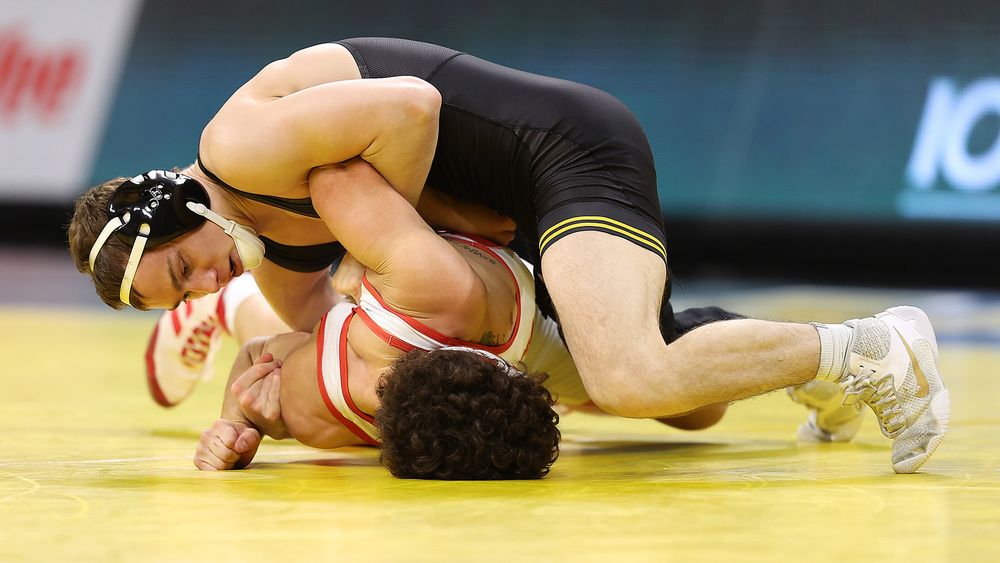 “I know they responded well to a long, long layoff. But really, what’s a layoff? There is no layoff, these guys are all serious about the sport so that question has been answered. We can get better, we have to keep getting better.”

The 141-pound matchup featured Hawkeye newcomer and top-ranked Jaydin Eierman. His opponent was All-American and seventh ranked Chad Red, Jr. Trailing 2-1 heading in the second period, Eierman used a five-point second period and added a takedown with a minute remaining to win, 8-4.

“It was amazing to finally get out there and do what I came here to do,” said Eiermen, who transferred to Iowa after being a three-time All-American at Missouri.

Eierman said his assignment at Iowa is to “help us win and dominate.”

Brands seemed just as interested in talking about what was ahead on the schedule rather that rehashing the rout of the Huskers. Iowa has won 19 straight Big Ten duals, 17 straight in Carver-Hawkeye Arena and 14 straight overall.

“You feel good about that performance, but what’s next?” Brands said. “That’s the first performance, what’s next? That’s where we have to keep going in our heads. It’s not tough to do, our job is easier because these guys have the right mindset.”

What’s next is a bus trip to the Twin Cities for a Friday border brawl against Minnesota. If it is anything like the Nebraska dual, things will be spirited and chippy. The competitive juices will flow and there will be marquee matchups at 157 pounds (No. 5 Brayden Lee of Minnesota versus No. 6 Young) and 285 (No. 1 Gable Steveson of Minnesota versus No. 3 Cassioppi).

Wrestling is back and so are the Hawkeyes. The layoff is over.