IOWA CITY, Iowa — There is no question Spencer Lee is a sparkplug for the University of Iowa wrestling team. The two-time national champion at 125 pounds has led off three duals this season and three times the mat has been slapped before the first period expired.

On Jan. 31, during a 36-6 win over No. 9 Illinois, Lee was the starter and heavyweight Tony Cassioppi was the closer. Feeding off the baseball analogy, team scores have been so slanted toward the top-ranked Hawkeyes this season that by the 10th bout, it isn’t a save situation. But Cassioppi rebounded from a 15-6 loss to Minnesota’s Gable Steveson nine days prior and decked undefeated and fifth-ranked Luke Luffman of Illinois in three minutes, 30 seconds.

“I wasn’t expecting to perform anything less than my best,” said the third-ranked Cassioppi, who improved to 2-1. “It doesn’t matter if we had last week off or what happened last week, it doesn’t matter.”

Iowa head coach Tom Brands doesn’t fret about his level-headed heavyweight. In fact, there can’t be a bigger Cassioppi supporter than Brands.

“(Cassioppi) belongs with the best in the world and that’s my opinion,” Brands said. “I’m going to need a little help from Tony himself to back that opinion. I can shoot my mouth off all day long and I’m sure there are plenty of enemies out there that love it and they can crow on that, but I know what this guy is capable of. We love how he operates but I know he can get in there with the best in the world. That’s why he made it look easy; it wasn’t easy out there, but it looked easy.”

Cassioppi led 3-0 before finishing Luffman with a cradle.

Spencer + Jaydin + Tony = 18 Team Points
Lee improved to 3-0 with his third first-period fall of the season, this time against No. 13 Justin Cardani in 2:27.

“The thing you cannot coach against is pace and energy,” Brands said. “If you watch Spencer Lee, there is your example of how to handle anyone who tries to keep it close… the progress you’re seeing there is, ‘you can’t slow me down because of my pace.’”

Eierman recorded his first fall as a Hawkeye at 141 pounds, pinning No. 13 Dylan Duncan in 6:08. Eierman led 7-3 before the fall via a cradle.

“That’s big and that’s Eierman,” Brands said. “The thing that set the cradle up was the straight leg sprawl. That guy pressured to come up and that’s when you take him off his own pressure.

“We didn’t force it. What we did force was our fundamental defense. We had three falls today, those are important, and they send a message.”

Another Top 8 Matchup Favors Iowa at 149
Round 5 of the Max Murin-Michael Carr series went to Murin, 3-1. Murin scored the only takedown in the final minute.

“I need to score more points. One takedown is not going do it at the end of the year,” Murin said. “I need to keep looking to score points. I want to look to score the whole seven minutes, no matter what. That is my game plan.”

Brands called Murin a competitor who makes every match a war.

“That was an important match,” Brands said. “(Illinois) gave us a lot of problems getting to our ankles and draping over. The finishes got slow and it doesn’t have to be that way. We have to hide our ankles better, but good job converting when he did.” 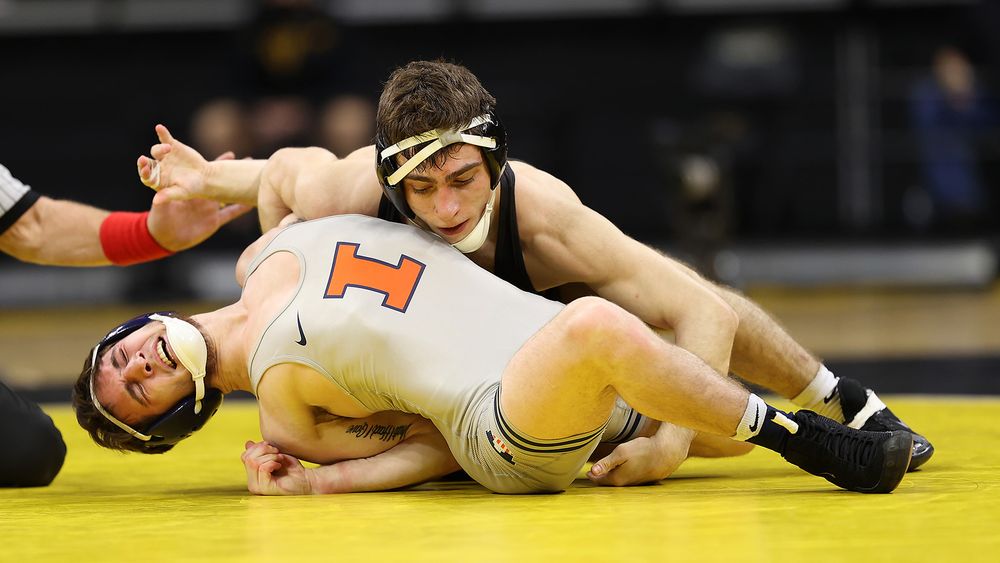 Got a minute? Watch video highlights

“We’re working to get better every day; scoring points is what we like,” said fourth-ranked DeSanto, who improved to 3-0.

“DeSanto has a motor as well,” Brands said. “Why is he scoring points? He has a high pace.”

After a takedown with 53 seconds left, Young had an 11-3 lead (with riding time). Instead of riding Johnny Mologousis, he released him with 35 seconds to go and secured his fifth takedown of the match. Young won by 13-4 major decision.

“He built his lead and got there, but why keep a match slow?” Brands said. “Keep the pace high.”

Another Hawkeye major decision came from top ranked senior Michael Kemerer at 174. Kemerer is 2-for-2 on major decision wins this season. His last seven victories (dating to 2020) have been by major decision, technical fall or fall.