ST. LOUIS — The University of Iowa is sending five wrestlers to the NCAA Championship semifinals for the first time since 2010 following quarterfinal action Friday evening at the Enterprise Center.

Iowa has nine wrestlers still alive in the tournament. The Hawkeyes lead the team race with 73.5 points. Penn State is in second with 57.5.

Four Hawkeyes on the backside of the bracket are within one win of the medal stand. Kaleb Young picked up a pair of wins in the wrestlebacks to advance to the Round of 12. On the top side of the bracket, Max Murin and Alex Marinelli dropped overtime decisions, and Jacob Warner fell 3-2 in the quarters.

Four of Iowa’s five wins in the championship round included bonus points. Lee, DeSanto and Kemerer all won by major decision, and Eierman added a fall. The Hawkeyes have scored bonus points in 16 of 25 tournament wins.

Lee scored a takedown in the first, escaped in the second and piled on seven points in the third, including a reversal, four nearfall and a point for riding time to win 10-2 at 125 pounds. He is in the NCAA semis for the third time in his career.

DeSanto matched Lee’s major decision with his third bonus-point win of the tournament. He scored two of his five takedowns in the third and added a point for riding time to win, 13-5, at 133.

Eierman wrestled a scoreless first period before escaping in the second, locking up a cradle and ending the match with a fall at three minutes, 49 seconds.

Kemerer scored his fifth takedown in the closing seconds of the third period to put bonus points on his 13-4 quarterfinal win.

Cassioppi won by 4-1 decision, completing a takedown and rideout with one minute, five seconds left in the third to advance at 285. 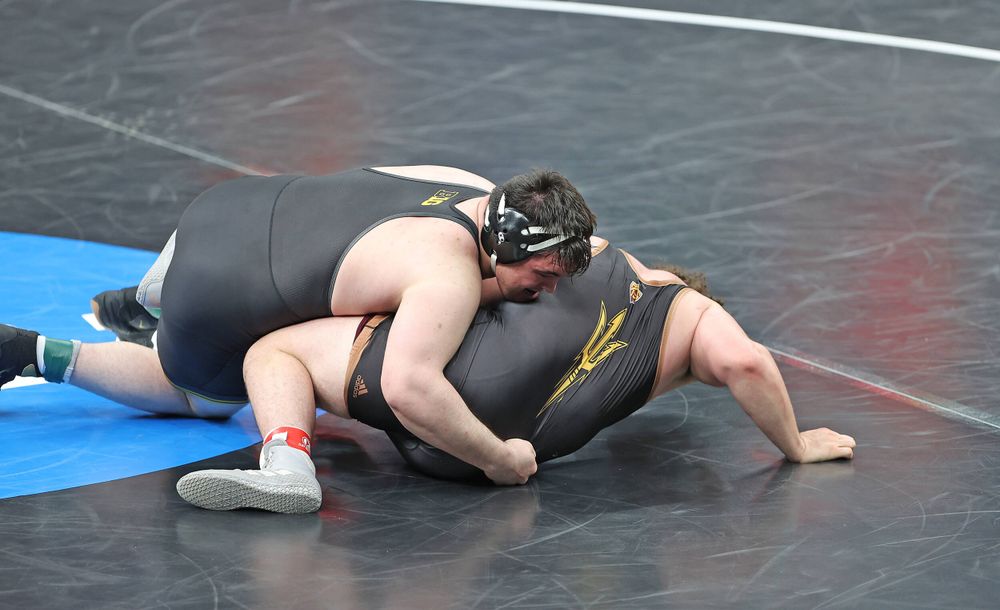 The NCAA Championships resume Friday with semifinal and consolation rounds beginning at 7 p.m. ESPN and ESPN3 are providing television and online coverage of Session 5.

NOTABLES
• Lee has outscored his opponents 41-8. He improved to 13-0 in his career at the NCAA Wrestling Championships, outscoring those 13 opponents 158-21.
• Lee has won 33 straight, outscoring his opponents, 414-42.
• DeSanto reached the NCAA semifinals for the first time in his career. He is 3-0 in the tournament with a major decision, technical fall and fall.
• Jaydin Eierman won his 100th career match (89 at MIZZ, 11 at Iowa).
• Michael Kemerer outscored his three opponents, 52-12.
• Tony Cassioppi has outscored three opponents, 24-2, to advance to the semifinals in his first NCAA Championships.
• The last time Iowa had five semifinalist was 2010 (McDonough, Dennis, Marion, Metcalf, Borschel).