Vasquez, a Norwalk, California native, is a right-handed pitcher who appeared in 51 games over three seasons for the Knights. Vasquez has a career 2.16 ERA and 19-11 record. She has thrown six complete game shutouts and struck out 175 batters.

“We are thrilled to have Breanna join our Iowa family,” said Gillispie. “She brings a wealth of experience to our young squad.” 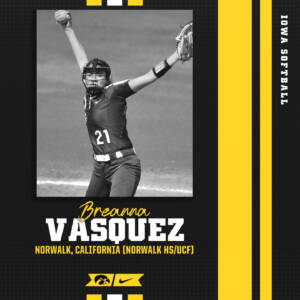 As a freshman Vasquez was named a NFCA third-team all-region selection and named to the American Athletic Conference All-Rookie Team after posting a 1.72 ERA over 142.2 innings.

Vasquez started eight games for the Knights as a sophomore during the COVID-19 shortened season. She amassed a 4-1 record and a team-leading 1.79 ERA. She struck out 25 batters while allowing only 20 hits.